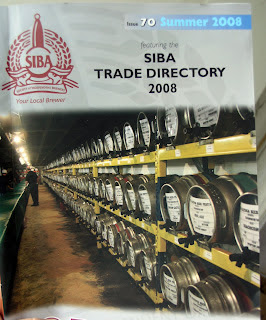 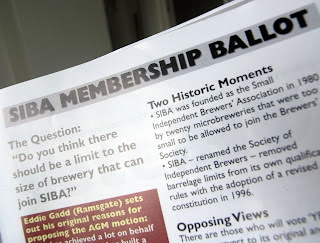 SIBA, the Society of Independent Brewers is getting its knickers in a twist on the question of its members "do you think there should be a limit to the size of brewery that can join SIBA?"
This needs a little explanation. The question is really "should the regional 'family' brewers be allowed to join SIBA?"
The Independent Family Brewers of Britain (IFBB) can be found here.
SIBA was created in 1980 by brewers too small to join the Brewers' Society. Years have passed and SIBA's membership is now in the hundreds and the organisation has the ear of the media and the government (probably more so than the IFBB.)
The "Family Brewers" are now knocking on the door of SIBA and SIBA can't make up its mind if it should let them in. This is a bit rich of the Family Brewers considering the contempt they had for SIBA in its early days.
The YES faction (yes to the capacity limit, that is) is put by Dave Maggs of West Berkshire Brewery:
"Their [the regional/family brewers] agenda is totally different to that of the small independents. Most have tied estates, which they naturally want to protect, whereas we are constantly looking for access to market. Some are PLCs and as such are a contradiction to a Society of Independent Brewers. A PLC by nature cannot be independent and will be driven by the demands if its shareholders, who are not all committed to our cause [of locally-produced craft beer]. PLCs will buy up pubs – tied or free – thus reducing our market options. I have certainly lost a great deal of outlets to my nearest PLC brewer. It's not that I hold a grudge, I just don't see how we can be in the same organisation."
Mr Maggs has hit the nail on the head – the family/regionals are owners of tied estates largely impenetrable to the products of independent local brewers. That the family/regionals also brew cask ales is an irrelevence. Many also brew foul mass-market licensed or contracted beers: coupled with their tied estates I believe they are part of the problem faced by small independent breweries. Welcoming them into SIBA would introduce internal conflicts like introducing lions to the society of gazelles.
The NO faction is represented by Carola Brown of Ballards, long-standing SIBA activist (and a founder member if I recall corrrectly):
"Our major competitors in the distant days of the 'Red Barrel' real ale desert were the regional brewers. But they were also the only brewers who kept real ale alive at all when the nationals didn't want to. Now they have abandoned the 'them and us' mentality, and recognise that SIBA is the industry organisation that has taken up the quality beer torch and not only kept the flame alive, but made it burn more and more brightly! I have my doubts about admitting to our ranks brewers brewers who keep their estates closed to guest beers, whilst selling into what remains of the free trade; but will excluding them change that situation?"
This strikes me as sentimentality-driven hogwash – "But they were also the only brewers who kept real ale alive at all when the nationals didn't want to." So what? It's 2008 now, not 1975 (also something CAMRA would do well to note.)
FWIW, as far as I can see access to market is the biggest single issue facing small brewers, beyond red-tape and all other issues. They have craft beer in common with the family/regionals but are inhibited by the existence of tied estates, brewing and-nonbrewing.
My instinct would be to tell the family brewers to sod off. My more considered response would be a change to SIBA's constitution to say all pubs or estates owned by SIBA members should be commercially fully open (not just DDS) to all fellow members, including the family/regionals This would curb the unfair advantage of owning estates and encourage the growth of small brewers – that's the point of SIBA isn't it?
Would they still want to join? I doubt it.
Posted by Jeff Pickthall at 10:53 am 1 comment: