Observant Twitter followers will have noticed that I get fed up with session beer. I seem to remember tweeting "I'm drowning in an ocean of indifferent session beer" at some stage.

The problem is, my home county of Cumbria is a very conservative drinkership. It wants unchallenging session beer. 5% abv is regarded by many as ridiculously strong. Imported beers are conspicuous by their absence. I get bored and more than a little frustrated. I've nothing against session beer, I just don't want it to be the only style (or range of styles) available to me.

Fortunately there are some positive developments: "Hardknott" Dave Bailey's admirable efforts are well-documented in blogsville; Bitter End are rumoured to be brewing an 8% "extreme" IPA and Stringer's brew "Black Flag", an luscious 8% stout.

I've recently discovered another tremendous Cumbrian beer that has the potential to entertain the beer geek (as opposed to the real-ale enthusiast): Croglin Vampire by Cumbrian Legendary Ales. First brewed in 2007, its only regular outlet is the Kirkstile Inn which shares ownership with the brewery. Only rarely has it appeared anywhere else.

A few weeks ago I interviewed Roger Humphries, the owner of the pub and brewery, for my little beer column in Cumbria Life magazine.  A few days later a box of bottles arrived in the post. Most were 500ml bottlings of their regular beers, of which "Loweswater Gold" is the star (current title-holder of SIBA's Northern Region Best Bottle Beer.) 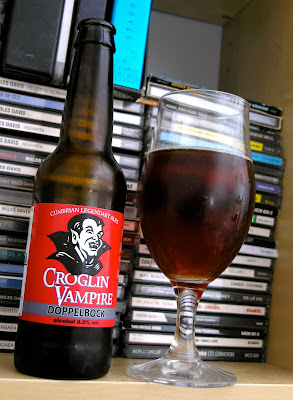 Amongst the 500ml bottles were a couple of 330s which immediately provoked my curiosity. "Croglin Vampire, Doppelbock, 8% abv." I bunged them in the fridge and longed for beer-time.

I was astonished. A Cumbrian brewer producing something quite un-Cumbrian. The beer is dark ruby red with a rapidly-dimishing head leaving attractive "legs" down the side of the glass. There isn't a big aroma, just some generic malt with some forest-fruits.

But the mouthfeel and flavour! What a treat! The phrase that sprung to mind was "a symphony of malt". Layer upon layer of nuanced malt loveliness revealed themselves with a sumptuous velvety mouthfeel. Very special.

In a beer world in which shouty hop-bombs hog the limelight, malt complexity is frequently sidelined. Crog Vamp is a perfect reminder of the delights of malt.

I emailed Roger telling him how good this beer is. My enthusiasm stirred, I wanted to share this beer with the beer geek world.

The other day I had a meeting with Roger to work on a marketing plan for Crog Vamp. I've recommended that as a matter of urgency he engages with us online beer geeks in two ways: get Twittering, and send out bottles for reviews by bloggers.

Yes, you read that correctly – there are bottles available for review! If you are an internet beer reviewer you can have a bottle or two. Roger will need your address so please leave it here, and I'll pass the info on.

Inbev At It Again 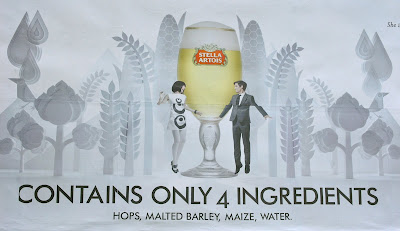 It gets a bit irksome doesn't it?

As beer geeks, we're clued up about our favourite beverage. We know that no decent beer ever "contains" maize (or corn syrup as it probably manifests itself.) It annoys us that Inbev UK Ltd have the bloody cheek to rely on the average customer's ignorance to make a selling point of a cheap adjunct.

It's also annoying that they choose to ignore the humble unsung-hero of brewing: lovely miracle-worker yeast.

This campaign first appeared a couple of years. It appears to have been revived. There are umpteen hoardings carrying the advert across Newcastle. I presume they have reappeared elsewhere too.

So rather than getting annoyed and bitching to each other about AB Inbev's attitude, why don't we do something about it?

As the "four ingredients" statement is untruthful in neglecting yeast, this advertising probably breaches advertising regulations. We should complain. In fact, I've done it already. It's easy; here's the link to the Advertising Standards Authority online form: http://www.asa.org.uk/Complaints-and-ASA-action/How-to-complain/Online-Form.aspx I'm not sure that multiple complaints on individual subjects adds any weight, but it can't do any harm can it?

[Please make sure you complain about Inbev UK Ltd]

Here's the rather predictable response fro the advertising standards people:

Thank you for contacting the Advertising Standards Authority.  I’m sorry to hear that this ad has caused you concern.

You may be interested to know that we’ve previously received a few complaints about this ad.  Complaints included concerns that the ad didn’t list yeast and carbon dioxide as ingredients.

We reviewed the ad and sought the advertisers’ response to these complaints. I should state from the outset that we will not be taking further action in respect of these complaints.  I realise you feel strongly about this ad, but please let me explain how and why we reached this view.

The advertisers explained that the claim relates to the liquid produced at the end of the brewing process.  Both the advertisers and we accept that yeast is used in the brewing process to start the fermentation.  However, the yeast is removed after the fermentation process, using a combination of three methods, which ensures the yeast doesn’t appear in the end product.

We consider that most consumers are likely to know that yeast is needed for the brewing process, and that carbon dioxide is a by-product of that process.  In our view, the ad is unlikely to mislead consumers to their detriment as to the nature of the product or how it is produced.  Given this, we will not be pursuing these complaints further.

Although we’ve been unable to uphold these complaints, I’d like to thank you for taking the time to contact us with your concerns.

That response hasn't exactly come as a surprise. As Beernut was quick to point out, Inbev's defence would be that Stella doesn't contain yeast as it's filtered to death out.

Fair enough. We could all see it coming.

I'm still not satisfied with the advert. OK, I'll put my hand up to the accusation of pedantry, but their use of the word "contains" bothers me. I'd be happy with "brewed from" but as far as I can see Stella does not "contain"malted barley, maize or hops. I'm not a brewer, I don't really know how to word it in a properly technical way but Stella must rather contain proteins derived from malt and maize, and a smattering of acids from the hops. And good old alcohol and CO2 of course.

As you can see from the response email "The advertisers explained that the claim relates to the liquid produced at the end of the brewing process." Well, Mr In-Fucking-Bev, the liquid DOES NOT "contain" malted barley, maize or hops – I could bloody well see them if they were there and they would get stuck in my teeth if I were ever to lower my standards enough to consume the stuff.

I may well make another pedantry-inspired complaint.