I have long been fond of the beers of Anchor Brewery.

Memories are vague, but I think I can trace my awareness of Anchor Steam Beer to Michael Jackson's Beer Hunter TV series of 1989. If I recall correctly, the beer was first imported to he UK in 1991. I don't remember when I first got my hands on a bottle of Steam, or any of the other Anchor beers, but I was certainly drinking them regularly before my first trip to California in 1998.

Being a beer geek was different then. Entertaining beer was rare. Feeding beer geekery necessitated a state of constant vigilance, and regular speculative outings to places where desired exotic beers may appear. Disappointment often ensued. Although the internet had arrived, beer coverage was spartan, and there was little opportunity to communicate with fellow beer lovers. Living in London, my beer geekery took the form of buying random bottles from Oddbins, Selfridges, Army & Navy Store*, Pitfield Street Beer Shop, Nelson's Wines in Merton, and of course, supermarkets. Other than the Anchor beers, US craft imports were then very sporadic.

I adored Anchor Liberty Ale. Although only modestly hopped by today's exuberant standards, then, in the nineties, it stood out for its exotic hoppiness. Such depth of flavour - such complexity - such intelligence to conceive of such a beer.

Liberty Ale introduced me to American IPAs. In the late nineties and into the new millennium, a passion for the style was one of the motivating factors behind my brother and me opening one of the earliest establishments in the UK to use the term "Craft Beer". We figured that it wasn't just us who could be thrilled by big new flavours. We were right.

But by 2005 US IPAs were losing their allure for me. In 2004 I judged at the Great American Beer Festival. This episode was pivotal for me. I was thoroughly blasted by hops. After one particular day judging, my tastebuds were knackered. That evening, in the Falling Rock Tap House, my tastebuds were dead. Only a particularly sweet perry managed to penetrate the hop deadness my mouth was experiencing. From that day on, my fondness for US IPAs declined. I had reached peak hop. On my second trip to GABF in 2005 I gave myself a no-IPAs rule and sought out delicacies such as Pilsners and Belgian wit beers. And by crikey, I enjoyed myself.

In the past decade I have watched the British IPA boom with fascination. It is flattering to have my prediction confirmed that large numbers of fellow Brits could get into big-flavour IPAs. At the same time, it is disheartening to listen to new-wave beer geeks obsessing about big hops while giving modestly-hopped beers the cold-shoulder. I'm not the first person to utter this heresy: big hops are the new boring brown bitter. These days I spurn invites to overtly craft-beer establishments because of the dominance of IPAs. Imagine turning on the radio and finding every station playing heavy metal, or country, jazz, or techno, or whatever your least favourite musical style may be – this is the feeling I get in many craft specialist places. IPAs are boring now.

Having firmly dissed IPAs, I'm going to tell you about my new beer infatuation. It's an IPA, quelle horreur! It's Anchor's new IPA, and it's a work of art. It won't be hoppy enough for johnny-come-lately beer geeks, but to expect it to be stridently hoppy would be to miss the point of this beer. This is a beer of subtely, depth and complexity - qualities that elude many modern IPAs. The malt background is of toffee. Yes, an IPA with a malt background, you did read that correctly. Anchor Brewery knows how to use malt. It may be the grand-daddy of all US microbreweries, which may suggest hop genius. But no, for me, Anchor Brewery is the malt master. Anchor does malt complexity like no one else. I have seen the future, and the future is malt. 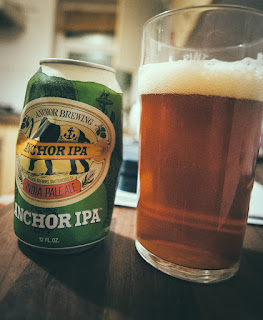 * The Army and Navy flagship store in Victoria had a good beer selection.