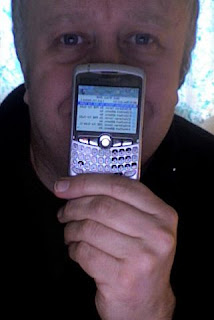 Relax, relax, I'm not giving up beer for the month, or anything stupid like that.
While browsing around my blog preferences and wotnot I've noticed that I can email blog entries as drafts straight into the list of posts.
Getting in touch with my inner nerd, it dawned me I can use my Blackberry to post my spontaneous thoughts on whatever beer I'm drinking from whatever location I'm in.
So that's what I'm going to do. For the whole of 2009 (or until I'm bored or the Blackberry falls in a deep-fat fryer as a friend's did) I'm going document every beer that passes my lips.
Yes it's going to drive everyone nuts, but I don't care, my inner nerd has got the better of me and he must be satisfied.
Look out for beer number one, probably tomorrow, New Years Day.  Have a happy one.
Posted by Jeff Pickthall at 11:43 am 5 comments:

It will be interesting to watch what effect the slump in the housing market will have on the pubs-for-sale trade.

For a decade, high property prices have had developers rubbing their hands with glee at pubs coming on the market, and this is one of the factors killing our pubs.

If the credit crunch is clipping the wings of developers, will we see fewer pubs turning into flats and houses? Let's wait and see.
Posted by Jeff Pickthall at 12:33 pm 2 comments:

Remember this in twelve months

On Christmas day, as brother and I slaved over a hot stove, we held a beer aperitif tasting session. It was largely selected at random from the various beers Steve had recently picked up from Rehill's (we know it as "Refills") of Jesmond, Newcastle.
Cutting a long story short, the beer that accompanied our turkey to the dinner table was "Orkney Blast" from the Swannay Brewery of Orkney. It achieved Christmas Day pole-position entirely by accident and, bloody hell, it matched perfectly.
A 6% strong golden ale with well-balanced  honeyed sweetness and low hop bitterness backed by gentle caramel malt, it matched the traditional Christmas turkey combo rather excellently. Had I been asked to recommend a beer style for Christmas turkey matching I might have been tempted to look for a Vienna or darker Czech lager or a bock. Accidently we stumbled across a beautiful match.
Let's hope we can get some next year and that we can wean family members off their Jacob's Creek!
Posted by Jeff Pickthall at 10:32 pm 3 comments:

We know all too well that a whole set of factors is contributing to the decline in the pub trade: smoking ban, beer duty, the tie etc.
What really deeply and profoundly angers me is pubcos (including the regional and "family" brewers )selling underperforming  pubs with covenants prohibiting their future use as pubs. It's a bully-boy spoilsport activity whereby the pubco aims to reduce future competition for its remaining pubs.
If I own a car and decide to sell it, can I insist that the new owner never drives on a motorway? If I sell a guitar can I insist the new owner never plays a minor chord?
No I bloody well can't. Just how are pubcos allowed to get away with this hateful behaviour?
This practise is destroying buildings we know and love as pubs that may be perfectly viable in different hands.
I know they're not the only ones, but here are Enterprise with a scorched-earth policy.
Posted by Jeff Pickthall at 1:26 pm 2 comments:

Enterprise, backed into a corner, lashes out at tenants

Enterprise are continuing their "poor old us: look how badly we are treated by our nasty tenants " approach trying to distract attention from their brutal exploitation of unfair competitive advantage (the tie system).
Link here    and here     and here
Not falling for the sob story, "Big" Nick Bish of the Association of Licensed Multiple Retailers continues to give them a bashing.
Link here.
Posted by Jeff Pickthall at 2:43 pm 1 comment:

As a Billy-no-Mates in my unglamorous hometown of Barrow-in-Furness (which is not a town festooned with good pubs and beer anyway) I'm currently deprived of quality pub time. Inevitably I find myself buying beer from Tesco, Asda, Morrisons and Booths.
Before any tickers, raters or scoopers get a bit sniffy about the non-rarity of my recent beer consumption I'd just like to say - been there done that. For those of you who don't actually know me, a quick reminder – my brother and I created, owned and ran MICROBAR (terrible picture!) in London. Our beer range was pretty damn good. We scoured the whole of Europe and several places beyond for beer we thought exceptional. Several times we could boast the full range of Trappist beers, including the Westvleterens. I also worked for Utobeer for two years and was involved in the set-up of the Rake. Had Ratebeer been around in the late nineties into the naughties my latent list-making urge would have come into play. But it didn't. I do still pick up odd bottles of more exotic stuff on my travels, but I'm not as obsessed as I once was.
Anyway... at the weekend I was tidying up and getting ready for the recycling collection when it occurred to me to photograph my recent domestic beer consumption – as you do.
Here goes (from the left, sort of):
Melbourn Brothers Apricot – I know this one doesn't meet with universal approval, but I love it. I'm told it's discontinued, and that makes me sad. I'd prefer it to be a bit less sweet, but I love the layers of flavour. Here's an extract of a review I wrote for Difford's Guides - ". numerous attractive flavours nestled snuggly side-by-side - we marvelled particularly at white chocolate, fresh apricot (naturally) and a herbal, hoppy finish."
Brooklyn Black Chocolate Stout – a renowned beer for grown-up palates. I though it would be robust enough to benefit from a couple of years in my little cellar. Sadly it was extremely oxidised. "OTF" as they say in the business.
Sierra Nevada Celebration – the last-but-one of a case of 12 given to me by the importer in 2006. I've always found this beer to be too bitter. I'm not averse to high bitterness per se but it always seemed a bit "shouty" in SN Celebration. After two years in storage the bitterness had muted and the overall flavour matured into something quite special. Brilliant. I've read that this is a good beer for ageing, and I can confirm it.
Brewdog Punk IPA – excellent. I think Thornbridge Jaipur may have the edge in overall enjoyability and I intend trying them side-by- side sometime soon.
Anchor Old Foghorn – my favourite barley wine. Excellent for drinking when you've got a cold, even better when you haven't. Better than SN Bigfoot, its obvious rival.
[back row]
Praga – I don't know much about this beer. It's a proper Czech lager at 89p found on the bottom shelf of supermarkets. Drinkable and infinitely superior to Stella etc, but, ultimately, nothing special.
Cotswold Lager – OK, nothing wrong with it but nothing remarkable. I like the idea of a British micro dedicating itself to lager, I wish more would branch out from the 3.5-5% ale obsession.
Urquell – legendary, but not my favourite lager by any means.
Spaten Munchener – excellent soft biscuity malt character. Another good reason to shop at Aldi.
Bernard Dark – Tesco Drinks Awards lager category winner Oct '07 - I was on the panel.
Young's Special London Ale – Is it just me or have Youngs beer improved since the Bedford move? SLA reminds me of one of my all time faves - Anchor Liberty Ale.
Barngates Red Bull Terrier – My fave Cumbrian beer. The bottled version lacks a little of the depth  of the sublime cask version, nonetheless an excellent beer.
Harviestoun Bitter and Twisted – I have to be in the right mood for this one. I always look out for their beers on draught.
Bakalar – Cheapo Czech lager from Morrisons. Nice malt but let down by a metallic edge.
Broughton "The Gillie" – I've thoroughly enjoyed this in the past finding it a like Orval-lite but I didn't enjoy this one. Perhaps I was in the wrong frame of mind.
Sharp's Chalky's Bite – Comment here.
Wychwood Black Witch – Seemed promising but ultimately two-dimensional. Juvenile branding perhaps having a psychological effect on me.
Okocim – the lager I most enjoyed recently.
Grolsch Weizen – Although the Bavarian weiss beer style isn't a favourite I do recognise this as an absolute corker. The Germans must be furious.
Hawkshead Brodie's Prime – A truly great complex dark ale on draught, again the bottled version lacks a degree of complexity.
Williams Brothers Midnight Sun (not pictured) – Tremendous. I've been a bit underwhelmed by Williams Bros beers in the past but this one was great. Another Tesco Drinks Awards Winner.
Posted by Jeff Pickthall at 10:50 am 10 comments:

Ok, we have a good expression for people who don't "get" music, or just don't listen to instructions or sage advice.
I'm looking for a similar pithy expression for the sense of taste. It needs to say "this person has no appreciation of flavour and is immune to the cajoling of wiser and more experienced drinkers."
I think it would be quite useful for drinkers of Fosters and for my mother who, at Christmas, will treat herself to a whisky-and-tonic.
Many Thanks.
Posted by Jeff Pickthall at 10:13 am 7 comments:

Quick Questions About The Smoking Ban

I need to silence a UKIP loudmouth. Please help.
In which European countries (if any) is smoking in bars still allowed?
Am I correct in thinking the the smoking ban wasn't imposed on us by Brussels?
TIA
Posted by Jeff Pickthall at 3:20 pm 9 comments: