DO try this at home

Ten years ago, running "Microbar" one of the UK's earliest overtly "craft" bars*, my brother and I would try to enhance customers' appreciation and enjoyment of the beers we sold by carefully considering the order in which they would be consumed.

Many customers would peruse our ever-changing beer list. This would give us the opportunity to have a chat with them. We'd try to work out what beer, or beers, they would enjoy with some gentle interrogation: have you had a drink already? Do you normally prefer light or dark beers? Stronger or weaker? Have you eaten or will you eat later? Do you need a thirst quencher?

After gaining an impression of the customer's needs we would make our suggestions. A typical "three course" suggestion would be: a pint of something quenching such as a Pilsner or Belgian wit; A juicy British or US IPA; something strong and Belgian, such as my favourite Trappist beer, Rochefort 8.

Steve and I are still firm believers in getting the order of consumption right. Too often we see people plunging straight into big hop IPAs then disparaging more modest beers such as Pilsners and British session-strength beers as being "insipid". You morons!

Sorry, I'm turning a bit ranty about this so I'll quickly get to the point that inspired me to think about the importance of drinking beers in the right order:

You must try Pilsner Urquell immediately followed by Budvar.


The savoury quality of the Budvar explodes after PU has lit the fuse.

(I love PU, and I love Budvar. PU is the more austere of the two, Budvar the more flamboyant – the Bert and Ernie of the beer world.) 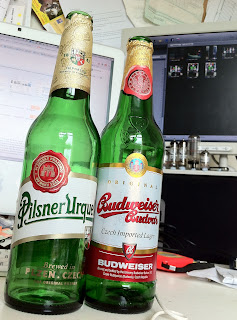 *North Bar in Leeds was at it it from 1997, we opened in 2001, but without social networking we didn't know of each other's existence.
Posted by Jeff Pickthall at 10:42 am 2 comments: