Your last chance to contribute to the greater beer wisdom

Way back in October (was it really that long ago?) I set the ball rolling on some original something-ological beer research

I'd really like to embark on some analysis. I was looking for a minimum of 100 responses to my survey. Currently we're on ninety-something. So, if you haven't done it already, take my survey, and please pass it on to your beer-drinking friends. The more responses I get, the better the overall data will be.

Here is the direct link to the survey.

Just shoot from the hip. Select responses that feel the least wrong to you. Don't dwell too much on the subjects of some of the questions - I'll explain it after I've closed the survey.


Posted by Jeff Pickthall at 10:17 am No comments:

The Most Drunk I've Ever Been - Without Alcohol. 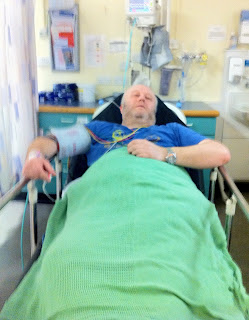 On Wednesday morning I was at my desk doing some preparation for the Lancaster Beer Festival.

I've had an annoying head cold for a couple of weeks. You know the kind of feeling - like someone's stuffed a cushion into your head.

While entering data into a spreadsheet I was struck by a strange sensation. The cushion seemed to expand and shift suddenly to the right. This preceded what, had I been standing,  would be described as a collapse.

I picked myself up. On my feet I crashed into doors, bannisters and furniture while my vision swirled anti-clockwise around a central point.

The calm and rational voice in me told me a head-cold can affect the magical workings of the inner-ear, the mechanism that looks after balance, amongst other things.

My inner-caveman grunted "PANIC: something terrible is happening!" while the calm and rational self looked on disdainfully.

I called a local friend who whizzed round and drove me half a mile up the road the A&E at Furness General Hospital. I staggered to the reception desk and hugged it close to keep me upright. As they took my name a wheelchair appeared behind me. In the waiting room I struggled to stay upright in the chair; I needed to be horizontal.

I was wheeled into a cubicle and heaved onto a trolley* with the cot-like side rails up.

Nurses plugged me into a machine that goes ping and inserted a catheter cannula at my wrist. I was asked if I minded medical students being present. The doctor delegated my examination to the students who were very thorough while being friendly and chatty. I suppose when a chap like me collapses they've got to think about serious things like heart attacks, strokes and aneurisms.

Despite the room spinning rather alarmingly and an increasing nausea I remained entirely lucid.

During the examination I started to feel sick. I've never witnessed the phenomenon known as "projectile vomiting" and I doubted such a thing existed. My doubts were banished. Several times.

An anti-nausea medication was injected via the catheter. A CT scan and blood sample were sent off for analysis.

The test were fine. Other problems were ruled out and labrynthitis confirmed. A very unpleasant ailment but far from being life-threatening. About three hours after arriving I was discharged. I was given a packet of prochlorperazine should the symptoms recur.

I missed the judging at Lancaster BF.

*The thing Americans call a "gurney". A word I find faintly disturbing.