What Am I Looking For? (My Beer Of the Year Award)

I was in the pub recently with award-winning blogger Woolpack Dave and his partner Woolpack Anne. The conversation between Dave and I (Anne, despite being entirely sober, was nodding off) was about what we look for in a beer; the quest, the never-ending search for the next great beer.

Ten years ago I was infatuated with American IPAs. I thought they were the be all and end all. My first couple of trips to California in the late nineties had convinced me that big, bold and assertive beers were the future. This thought was part of the inspiration for creating Microbar. I wanted to bring a bit of the  US's craft beer culture to the UK.

Since then, I have mellowed in my view. I like to think my understanding of what sells to whom and why (in the socio-demographic and individual senses) is rather good. Years of experience and observation have tempered my enthusiasm for hop-blasts and caused me to re-appraise my early view of them as saviours of beer (I still love them and crave them especially here in Cumbria where one hop cone is passed around the various breweries for a waft over the wort).

No, today I'm looking for something that transcends the thrill of blasts of flavour and bitterness.

I'm wary of the description "balanced". For me, that word brings to mind obsessions of an older generation of cask ale drinkers: the regional brewers, sessionability, CAMRA and boring brown beer. "Balanced" is too close to "b*lan**d" for my liking.

There is no single word for what I'm looking for. Here's a selection that go some way toward describing what I crave: harmony, complexity, layeredness, aroma, integration, surprise, poise, nuance, finish, moreishness.

I hope that those descriptors give you some insight into my selection for Jeff's Beer of the Year 2009.

GOLD: Anderson Valley's Boont Amber. I first came across this on draught in a bar in San Francisco in 2003. Since then I've dreamed of its symphony of malt and superlative but subtle hop character. Fortunately someone had the good sense to bring some in for the GBBF.

SILVER: Budvar. Yes good old "ordinary" Budvar. Throughout the year I've regularly been noticing that Budvar has gained hop character in a particularly beautiful way – it meets all, rather than just several of my criteria. Many times I thought my mind must be playing tricks on me as it's such a well-established and familiar beer. Anticipating having my mental health questioned I asked the chaps from Budvar UK if there had been any change to the beer in recent months. Breezily they replied "Oh, that's since the new head brewer took over last January." I swooned. The brilliance of my tastebuds confirmed!

BRONZE: Jarrow Brewery McConnells Celebratory Port Stout.  Neither really stouty or porty, nonetheless a great beer - undercurrents of treacle, chocolate and coffee with an abundant smack of hoppy orangey fruitiness. Despite pseudo-Victorian pumpclip imagery, it's actually quite modern in its flavour profile.


There are many, many more deserving of honourable mentions. If I get time later I'll add some. Now I'm off to start my Christmas shopping. 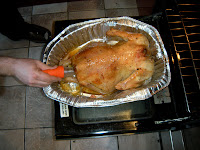 Last Christmas my brother and I matched Orkney Blast by Swannay Brewery with our Christmas turkey. It was heaven. This golden ale with moderate bitterness and malty character partnered the roast avian and chipolatas with distinction. Brother and I grinned while sister-in-law, mother and step-father supped their indifferent plonk.

The great thing was, we hadn't planned the pairing. It has become a tradition for us to have multiple beer aperitifs on Christmas day by sampling a selection of beers we've picked up in the preceding weeks (we deserve it, up before dawn to put the sprouts on and slaving in slaving in a hot kitchen all morning). Orkney Blast made it to the table as it was the one that we opened just as everything was ready to serve.

This year we want to repeat the food matching triumph. Going for the same beer again, if we can find it, is much too obvious – what do you recommend? 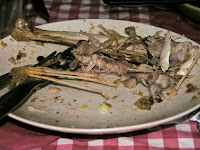 Writing About Beer Is The New Rock'n'Roll: Backstage After-Party With This Year's Sensation

The "beer is the new rock'n'roll" triteness (tritism?) has been lurking in my mind for a few weeks now, largely inspired by that popular beat combo Brew and his Dogs and their fanclub, er, shareholders.

I was reminded of it last week when Pete Brown was celebrating winning Beer Writer of the Year.

Late at night, with a group of friends away from the public gaze and already under the influence of a heady intoxicant, Pete was witnessed on his knees partaking of some unseemly ritual involving a sharpened implement and a substance known to this underground culture as "wax". With a smile on his face he went on to allow his guests to "sniff" the contents of a phial cryptically marked "Bass King's Ale, February 22nd 1902". He later poured out a syrupy liquid for his guests to consume. Soon they could be heard uncontrolably and deliriously drooling words normally reserved for flavours and aromas. Exactly what substances are being used by this dangerous counter-culture is anyone's guess. The police have been informed.