Good News from the North East

I've just heard that Mordue Brewery (one of my favourites) is installing bottling machinery. This is confirmation to the world at large that last year's receivership, restructuring and re-financing is allowing Mordue to grow. Arguably, it's a brewery that failed to fully capitalise on its 1997 CBOB win. All being well the bottling of its tremendous IPA will give the brewery the national recognition it deserves. Lookout Brewdog IPA and Thornbridge Jaipur!
While in Newcastle last week my brother and I eavesdropped on a charver who looked distinctly out of place amongst the community arts project types in the Cumberland Arms. His friend insisted he drink Mordue IPA. His response? - "It tastes of fuckin' flowahs!" Isn't that a great advertising slogan? I can see the t-shirts now.
Posted by Jeff Pickthall at 10:57 am 8 comments: 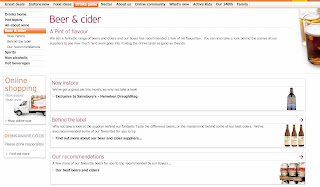 I see Sainsbury's are now selling cask beer. Or maybe not.
Posted by Jeff Pickthall at 11:41 am No comments:

Protz on the BEC Report on the Pubcos

It's Official: Pubcos Are Evil (and CAMRA supports them)

The House of Commons Business and Enterprise Committee has published its report on the Pubcos.
You can find the full report here.
A rosy picture of the pubcos it ain't. I've so far only studied the first six of eighty or so pages. These quotes should give you a flavour of the findings:

"Our call for evidence gave us two irreconcilable pictures of the industry. The first presented a picture in which pubcos operating the tie were able to give their lessees considerable support, and in which the admittedly higher costs of tied products were offset by lower rental and extra support and services. The second picture, which came from individual lessees and from campaign groups, was of an industry in which the higher costs imposed by ties meant that lessees were at a disadvantage to free of tie competitors and pubcos used their superior bargaining power to exploit lessees, in many cases failing to carry out their contractual duties, while refusing to give lessees in difficulties any leeway. "

"There is a worrying pattern in the evidence presented to us of lack of support for lessees, of verbal agreements not honoured, and, on occasion, of downright bullying. "

"We have no confidence that the advantages of the tie outweigh its drawbacks."

"The practice of pubcos selling buildings they no longer require with restrictive covenants preventing their use as a pub should be banned."

"However, our provisional view is that the tie should be severely limited to ensure there is proper competition in the market."

"As is noted elsewhere in this Report,8 in evidence to us both Mr Thorley of Punch and Mr Tuppen and Mr Townsend of Enterprise Inns made assertions which, on investigation, proved to give a partial picture, or on one occasion were positively false. We recognise that those giving oral evidence may need to simplify a complex picture, and that slips of the tongue may occur, but these repeated slips have undermined the reliability of their evidence. "

No doubt the remaining seventy-something pages will reveal more unflattering insight into the pubcos.

So, I hear you ask, what does CAMRA make of all this?

“Camra supports the principle of the beer tie provided that the higher prices licensees are required to pay for their beer supplies are balanced by a lower rent, credible business support and the option of stocking a guest beer.”

Like a turkey supporting Christmas, CAMRA once again declares explicit support for the tie. Yes folks, the very same tie system that prevents microbreweries selling to nine out of ten pubs and that screws pub tenants. Sure it guarantees sales for the regionals (so many of whose beers are duller than ditchwater) but it seriously inhibits new entrants into the market. It holds back real ale.

The whingeing "stocking a guest beer" demand is cop-out. What CAMRA really means to say is "we want special case treatment for real ale such that any pub regardless of tie obligations must stock a real ale supplied directly by a brewer we approve of". Wrong wrong wrong.

Posted by Jeff Pickthall at 9:50 am 3 comments:

The Business and Enterprise Committee Inquiry in to the pubcos will publish its findings on May 15th.
Story here.
Note the final paragraph: 'The Campaign for Real Ale has said it will consider making a fast-track “super complaint” to the Office of Fair Trading (OFT) about the beer tie, after the report is released.' If the OFT has any balls it will respond "That's the same tie system, the anti-competitive practice you support, isn't it CAMRA? You can't have it both ways: end the tie for companies you don't like; retain it for the companies you do. Now go away and sort out which way you want it."
Posted by Jeff Pickthall at 3:28 pm No comments:

I was quite saddened to see the paucity of signatories to these petitions on number10.gov.uk

"We the undersigned petition the Prime Minister to Reduce taxation on Alcoholic draught beers sold and consumed on Licensed premises. Submitted by albert humphreys of licensed trade – Deadline to sign up by: 24 January 2010 – Signatures: 384"

"We the undersigned petition the Prime Minister to axe the beer tax. Submitted by rachael rogerson of south elmsall united services club – Deadline to sign up by: 14 August 2009 – Signatures: 19"

"We the undersigned petition the Prime Minister to REDUCE BEER DUTY TO THE DUTY LEVEL OF MARCH 1ST 2008. Submitted by KIERON BARTON of CHILLI MARKETING – Deadline to sign up by: 16 June 2009 – Signatures: 34"

I suspect that almost all petitions on the Number 10 site are ignored and they offer only a slight letting-off of steam rather than a being a genuinely useful method of influencing the government. The three I've listed above look pretty amateurish. Perhaps an internet blogger has the time and inclination to create a well written and informative petition that we could all publicise? Perhaps we bloggers should temporarily put down our swords about issues like sparklers and the merits (or otherwise) of CAMRA and use our powers of rhetoric for something useful.

Posted by Jeff Pickthall at 10:25 am No comments: