Note: Economic left is negative, Liberal is negative. E.g. the top left cell indicates economic leftiness and view of CAMRA have a correlation of 0.20.
As you can see, there are some very interesting results.
Once again I emphasise that we shouldn't presume that these results are true for the British beer world at large. These result only tell us about the 72 (and counting) respondents to the survey. Still – makes you think doesn't it?

I have colour-highlited some pairs of figures I find particularly interesting.

66 people have so far taken the survey.
All prominent beer bloggers responded apart from Tandleman (though the pseudonym "Big Nora" did have me wondering).
The average (mean) respondent is:
Left/Right: -4.57 (remember negative numbers indicate leftness)
Liberal/Authoritarian: -3.68 (Remember negative numbers indicate liberalness)
Rates CAMRA: 6/10
Rates the tie system: 3.4/10
Age: 41.8
Likely to be a current CAMRA member: 51%
Likely to be in (or have been in the beer trade): 37%
Gender: 90.9% male, 9.1% female
80% of respondents were UK-based
OK, I'm not suggesting that my survey tells us anything about anything other than the sample group, nonetheless, the averages do seem to look like a picture of an average cask-ale drinker/beer fan.
Tune in later for more analysis.
There is one piece of analysis that is quite startling – I'll tell you later.
Posted by Jeff Pickthall at 10:25 am 7 comments: 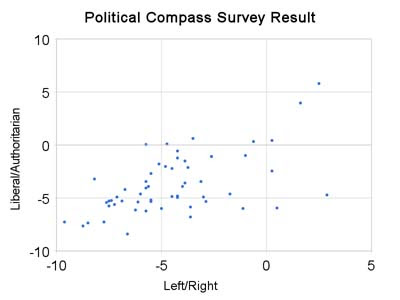 With 57 survey forms in this is how the left/right, libertarian/authoritarian spread looks.
The survey will stay open possibly indefinitely.
As you can see most of us beer fans are reasonably liberal and somewhat left.
A thought occurs to me: the Political Compass is American (I think). If it was British, would the weighting of the survey be different? I suspect the vertical axis would be shifted to some degree to the left reflecting the difference between what counts as the centre in the UK (or Western Europe) and the US.
Just a thought.
Tune in later for more analysis.
B.T.W. I won't be mentioning anyone by name.
[I've just installed Snow Leopard OS on my iMac – result: Excel isn't working. Thanks Microsoft]
Posted by Jeff Pickthall at 12:05 pm 6 comments:

We're up to 46 now but no sign of Tandleman yet. What's he scared of? Will the political compass reveal to him unpalatable things? Perhaps he'll be close to Norman Tebbit? Wouldn't that be a laugh?!
BeerNut has corrected his typo. He's no longer beyond Stalin!
Can we make it to fifty?
Posted by Jeff Pickthall at 9:09 am 2 comments:

We're up to 18 entries in my beer politics survey. That isn't nearly enough to be statistically significant. We're really not going to learn anything useful (possibly ever) as the sample group is largely self-selecting. Nonetheless I've been calculating some correlations (or rather, a spreadsheet has). Very little light is yet being shed on anything but I am getting some insight into certain individuals!
Hopefully by the end of today we'll have a few more entries. It's Friday so people will be looking for end-of-week work diversions.
p.s. Beer Nut: could you confirm your Political Compass scores? I think you may have made a typo as you're nearly off the graph!
Posted by Jeff Pickthall at 9:59 am 5 comments:

It had to happen.
I believe the tie system is the biggest challenge cask ale faces. I don't necessarily believe in an abrupt end and a change to a completely free system, but if were we inventing a system from scratch, without historical baggage, I would favour it.
I believe ties and tenancies should not mix. The jobs of brewing and selling beer become a game of estate agency and property management (and often squeezing tenants until the pips are beyond squeaking).
I am continually astonished that CAMRA supports the tie system. Then again, I'm not. CAMRA's underlying philosophy is that of the far-left. Any talk of increasing competition in the market is met with a wailing and gnashing knee-jerk reaction. I believe the Thatcher era is to blame. Raw memories are evoked by the word "competition". Quite rightly.
By criticising CAMRA's politicisation of beer observers have presumed – wrongly – that it is because I oppose the particular political flavour. They are wrong – it is the politicisation that I dislike. I believe it is irrelevent, misconceived and ultimately damaging to the cause upon which it has been imposed. Any superimposition of any political ideology is irrelevant to the promotion of the appreciation of good beer.
This came to a head recently when Tandleman called me an "old rightie". Oh how I laughed at this off-target student politics ad hominen! But I saw it coming. It had to happen.
It dawned on me long ago that CAMRA's keenest members tend to be politically motivated. Their pre-existing political ideals have been sublimated by the real-ale cause. The real ale cause, for many, is a surrogate for political beliefs. The political tail wags the CAMRA dog.
My curiosity has been provoked. Can I compile data that supports my view? Well, let's have a go.
I've created a survey that will hopefully shed light on the subject of CAMRA and politics. If I get a reasonable amount of data I will attempt some statistical analysis (if I can remember how to do this sort of thing, it's been a few years).
The first thing I'd like you to do is complete the Political Compass test. Do it and note down your result, you'll need it for my for my survey. You can also install the Political Compass as a Facebook application. Only do the test once. Don't go back changing your answers to fiddle with how you are perceived.
Done that? Good. Now please complete my survey.
Since you are wondering, here's a diagram of my Political Compass test. I'm the red dot. The others are various FB friends (number 4 is Woolpack Dave and number 8 is an American relative who swears by Fox News: you can't choose your rellies.) 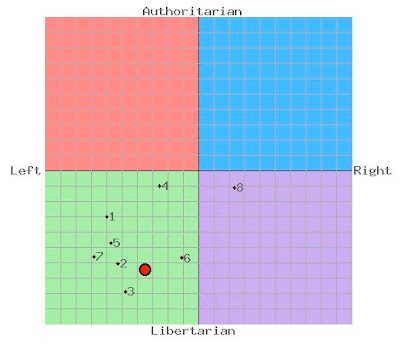 No Good Breweries in California?

About an hour ago I was getting a couple of tasters of unfamiliar cask ales in a pub I favour. Over my shoulder, came the advice "the Doombar is good."
The big butterscotch aroma and vinegariness suggested otherwise.
I chatted to the landlord. The weather was awful. We talked about emigrating. I said I would emigrate to California.
The voice came over my shoulder - "no good beer in California though."
This means either:
A: the speaker had tasted many Californian beers and come to the conclusion they weren't up to much.
B: The speaker was utterly clueless.
Given the "advice" about Doombar, I suspected B.
I later learned that the person concerned is a prominent local CAMRA "activist" and organiser of the local branch BF.
Posted by Jeff Pickthall at 8:43 pm 13 comments:

Much as I heartily despise the Daily Mail and its tiresome "Broken Britain" rhetoric, its racism and its encouragement of fear and hatred, it does give beer some good coverage.
Here, for example.
I still won't be buying it though.
Posted by Jeff Pickthall at 12:24 pm No comments:

Is the North of England Devoid of Good Pubs?

I found this map "Good Pub Guide National Awards 2009" rather alarming.
It's telling us England's most northerly good pub is in Peterborough. Wales and Scotland have one good pub each. Northern Ireland has no good pubs.
I feel like punching it.
Posted by Jeff Pickthall at 6:46 pm 5 comments: