Another dusty clipping from my archive.


Liverpool brewer’s research concludes real ale group is out-of-touch
The Campaign for Real Ale (CAMRA) has again been attacked for being out of touch with today’s beer drinkers.


The report comes just two weeks after CAMRA was widely criticised for its decision to ban two Greene King ales from the Great British Beer Festival and has fuelled claims that CAMRA is no longer representative of ordinary drinkers.


Cains conducted its research in and around Liverpool to identify the strengths and weaknesses of its brands.


It discovered that there was “widespread co nfusion” about real ale. Many drinkers thought it was the “obscure stuff drunk at beer festivals”.


But the most damning part of the research came in responses that mentioned CAMRA.
Many of the respondents referred to CAMRA in a negative way, claiming they would not drink real ale because it “is the stuff drunk by CAMRA members”.


In fact, Cains concluded that “rather than making real ale widely appealing, CAMRA may now be helping to make it exclusive”.


This criticism is ill-timed for the consumer group, which is already under fire from Greene King supporters for banning Old Speckled Hen and Ruddles County from this yearís Great British Beer Festival (GBBF).


But CAMRA has defended itself strongly against the latest criticisms.
Spokesman Tony Jerome said the new NaturALE pha se of its Ask if it’s Cask campaign, which features nude models, had gone a long way towards changing people’s perceptions of real ale.


“The campaign has used stylish images, including young male and female models to emphasise the natural aspects of real ale,” he said.


He added that CAMRA was now concentrating its marketing strategies on appealing to all drinkers and had employed a membership officer to target different age groups.
Mr Jerome also challenged brewers, such as Cains, to get behind the CAMRA campaign.
“We are targeting female drinkers who are usually ignored by brewers’ laddish marketing strategies,” he said.


“The Ask if it’s Cask campaign is challenging the bigger brewers to put some of their large marketing budgets behind real ale to target the youngsters.”

I have all sorts of old stuff lurking in my documents folder. Lots of old beer-related clipping from as long ago as 1998 which was about the time newspapers were starting to publish on the web.

Here's an article I found recently. I've tried googling chunks of the text but to no avail; I don't know where or when it appeared. The phrase "the Millennium effect is expected to halt the rot" would date it to the late nineties.


No longer ale and hearty


SOMEHOW, the beer-belly-and-facial-hair stereotype has got to be erased and replaced with a sexier image


Despite little change in the average darts player's girth - normally around about the eight-pint pregnancy mark - the average Briton is actually drinking less beer than he used to.
Recent figures released by the Drinks Forecast show that beer consumption has dropped in the past five consecutive quarters and, although the Millennium effect is expected to halt the rot, the decline is expected to continue once the New Year hangover subsides.

For hundreds of years, beer has been the nation's favourite tipple - even Elizabeth I used to have a quart of ale every breakfast - and that legacy has created a unique drinking culture. American tourists travel thousands of miles just to soak up the pleasure of sitting in Ye Olde Tourist Trappe with a pint of Ru …sty Widdle, while watching the classic evening migratory pattern of the thirsty British male. This normally involves a random series of movements from bar stool to loo to bar and back to bar stool, that reaches a perfect synchronisation of participants with one simple shout of "Time, gentlemen, please".

Yet if the current downward trend continues, this culture, these habits, and - most important - these flavours may well disappear for good. The number of village pubs is declining as fast as the number of post offices; regional breweries are closing down everywhere; and famous ales are being wiped off the corporate balance sheet and replaced with lagers, and ales that taste like lagers.


This year alone, Mitchell's of Lancaster, Ward's of Sheffield, Vaux of Sunderland and Alloa Brewery have all ceased production and, unlike distilleries (which can often be revived), they will never brew again.


Some of our older readers might remember drinking Old Dambust Ãer, Strong's Country Bitter and Blackpool's Best, but memories are all they are now. These and many more great beers have been axed for good. And if that is not suficiently depressing, just consider the following facts. Almost one in 10 pints drunk in this country is Carling lager; more than 80 per cent of all beer produced comes from just four giant breweries; and the most popular name for new shopping centres is The Maltings (after the breweries whose sites they now occupy). It is enough to make you cry into a pint of creamy, flavourless nitrokeg.
But blame for the demise of the ale drinker cannot just be directed at the corporate policy of a few big companies. Changes in tastes and social behaviour have as much to do with shrinking ale sales as anything else. It is difficult to pinpoint an exact moment when the rot set in. England rugby player Colin Smart's memorable post-match decision to drink a pint of aftershave instead of beer is one possibility. Bu «t the session-drinking male is definitely a dying breed.


The "pint after work" has been replaced with the "gym after work" and even that most reliable of ale drinkers - the rugby prop forward - has changed quaffing habits. With the arrival of the new super-fit "total rugby player", you are more likely to see Jason Leonard swigging Badoit than bitter these days.


Iain Loe of Camra, whose membership, ironically, is at an all-time high of more than 50,000, believes the increasingly fickle behaviour of drinkers has also contributed to the problems. "People are just not loyal to one particular favourite beer any more," says Loe, who also blames the lack of generic promotion for real ale.


Perhaps in response to the alarming sales figures, Camra has switched some of the emphasis of its campaigning away from negative sniping at the latest Firkin Forgettable or All Bar One Decent Pint towards a more positive approach of highlighting the good things about real ale. With the survival of beer (whether it is a microbrew or big brand) at stake, Camra knows that promotion is now more vital than protectionism.


So what is the solution? How can the brewing industry turn around its image and get more young people excited about Fuggles and Golding Hops, instead of Chardonnay and Cabernet Sauvignon? The answer lies in these two grape varieties. To make itself more popular, beer's best option is to reinvent itself as the new wine.


Over the past two decades, wine consumption has grown to the extent that it recently overtook beer in off-licence sales. Thanks to its healthy image and our gradual switch towards more Continental eating and drinking habits, this once-maligned drink has had a turnaround in fortunes of Martini cocktail pro ßportions. You only have to compare the size of beer and wine ranges in supermarkets or look at the relative grain to grape consumption in the new "gastropubs" to realise how wine now reaches the parts that beers used to dominate (never mind reach).


The challenge that beer faces is very different to that faced by wine 20 years ago. While wine had to escape its elitist trappings, beer has to break free of its working-class associations and become more sophisticated. Somehow, the beer-belly-and-facial-hair stereotype has got to be erased and replaced with a sexier image.


And it is happening, albeit slowly. If you had walked into Safeway's recent press tasting for its new ßbottled-beer range (and had not looked at what everyone was sipping), you would have thought you had walked into a wine testing. The same sniffing-and-spitting routine was going on, the same scribbling of notes on colour, aroma and taste.


Having crusaded for years to bring wine to the masses, our supermarkets now seem determined to do the same for good old ale, and the efforts being made by Safeway, Tesco and others could be the best chance of a bright beer future.


Who knows, if real ale really does manage to change into new clothes and return to being the nation's favourite form of lubrication, the great British beer gut might not be forced into extinction after all.

I can't be bothered with doing any of that "I drank such-and-such a beer" stuff, so here are some pictures instead. 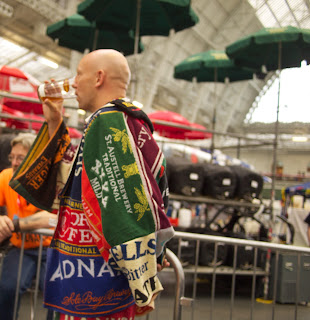 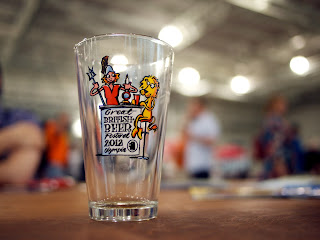 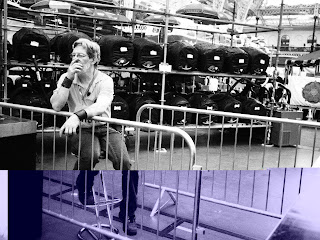 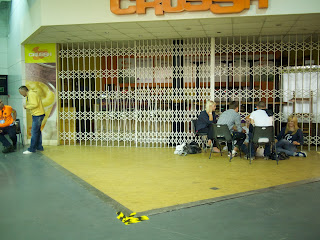 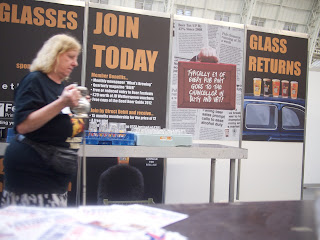 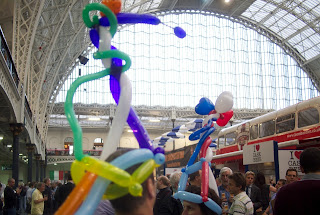 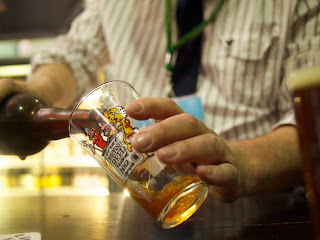 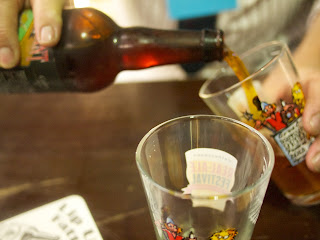 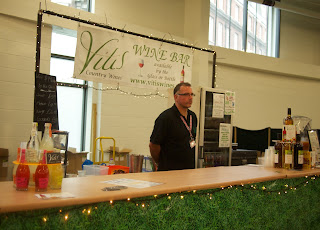 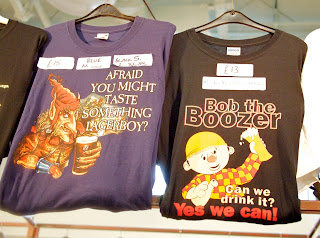 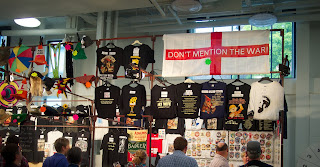 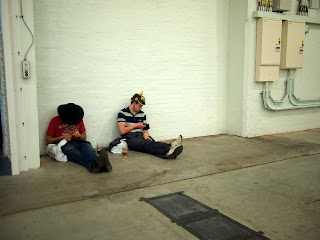 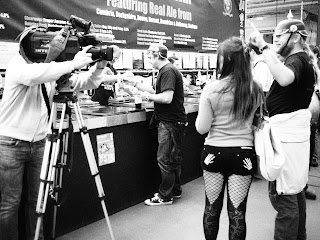 Posted by Jeff Pickthall at 9:46 am 3 comments: