My magic telly recorder machine thingy also picked this up (with aspect ratio gremlins).
Note the mention of "the disease of lager" and "war against fizzy beers and lager".
Posted by Jeff Pickthall at 5:21 pm 7 comments:

I have a TIVO video recorder (TIVOs are to SKY+ as Macs are to PCs but they're sadly no longer available in the UK). I can give it keywords to automatically record programmes. Naturally my keyword list includes beer and brewery. The other night it picked up a dreadful programme about a coachload of Brit tourists who have to vote each other off the trip for things like B.O. or having a Birmingham accent.
Anyway, the coach trip travelled to Belgium where our intrepid travellers visited the Cantillon Brewery. Cantillon beers aren't to everyone's taste and they come as a shock to the novice beerophile. Here we see "normal" people sampling Cantillon – pleasant viewing it ain't.
Posted by Jeff Pickthall at 2:26 pm 4 comments: 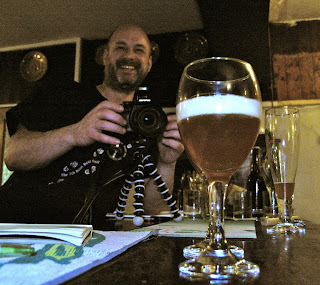 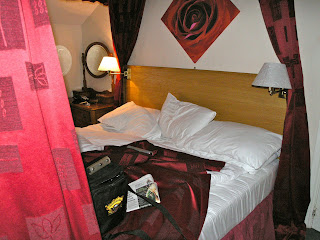 Last weekend I spent a night a Dave Bailey's Woolpack Inn. The pub is in Eskdale on the western side of the Lake District – the bleak, craggy side thankfully devoid of irritatingly twee Beatrix Potterisms.
As a city-lover, the silence, the proximity of sheep and the absence of a mobile phone signal left me somewhat unnerved. Beer came to my rescue as usual.
After warming up on two or three pints (including Dave's own "Tenacity", a complex dark red ale abundantly hopped) we embarked on a tasting of several bottles I'd brought from my secret vintage cellar:
Anchor "Our Special Ale" 2004. I confess I didn't have much hope for the ageing of this beer. I was wrong. Gloriously wrong. Compared to the young beer this had gone very slightly winey and posessed a less velvety mouthfoul: hints of port/madeira perhaps. The spicy aroma seemed to fill the room and even non-tasters were heard identifying spicy notes: cloves, cinnamon and more. The underlying orange rosewater flavour had also benefited from ageing - more coherent and altogether less cloying. No adverse signs of age such as flatness or oxidisation were detectable. A tremendous success which pleased me immensely because I've got a magnum of 2002 at home (bids in sealed envelopes please).
Alaskan Smoked Porter 2003 – last of a case given to me by the importer for looking after brewery owner Geoff Larson when he visited London. Geoff Larson himself gave me a half case of 1999 vintage but they've all gone. Although I'm not averse to smoked foods I've always found the smokiness of this beer overwhelming when it's young. Fortunately it softens with age, as we discovered. The usual slight vinousness (vinousosity?) effect had taken place but the only jarring note was a hint of oxidisation evident in the finish. Carbonation was unusually high.
Sierra Nevada Celebration 2005 (I think). I'm not averse to bitterness per se - I wouldn't be a beer drinker otherwise but I've always found Celebration's bitterness a bit much. Also the underlying liquid barley sugar flavour I find too rich. Fortunately this is a beer that benefits from ageing - as long as you can bear to give it. From this 4 year old we got a big waft of typically American hops. They were evident in the flavour but in a whole lot more agreeable fashion than young SN Celebration. The body was of pithy seville orange in a marmaladey way. Although carbonation was good we couldn't coax a head on the beer.
Orval v. Orval. I took along a bottle that had been hanging around for three years or more - or so I thought. It transpired it was only six months older than the young bottles in Dave's fridge dated 10/08. The young version: fresh zesty typical Orval but I sense that it's not going through a classic phase - 5 or 6 years ago it seemed to have more oomph, it lacks body now. Six months older: aroma and zestiness gone, suprisingly dull, very disappointing.
Gueuze Girardin 1882 "black label" (been in my cellar 2 or 3 yrs) I anticipated that by this stage we'd need a contrast for palate cleansing purposes. Instant aroma of old apples going a bit brown and wrinkled. The ciderishness in flavour was accompanied by woodiness and mustiness - and a heap of sourness. I don't know about Dave but it did the trick for me - it perked up my senses and gave me a brief boost and put a smile on my face.
My memory's vague, but I think we may have had another pint of Dave's own at this point.
My room was rather splendidly equipped with a huge triple bed and a double spar bath thingy. My sozzled sleep was almost enhanced by an entertaining dream involving the triple bed but a jolt of dehydration-induced cramp in my left calf cut it painfully short.
Posted by Jeff Pickthall at 1:27 pm 3 comments:

One of the problems... 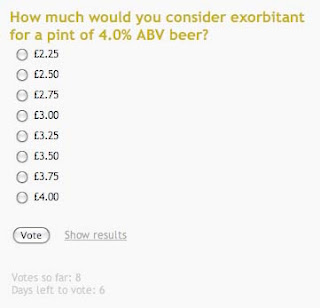 Pub Curmudgeon has created a poll - "How much would you consider exorbitant for a pint of 4.0% ABV beer?"
In a roundabout way he has drawn attention to a problem faced by brewers – there's no price differential between indifferent beer and exceptional beer: there is no higher potential reward for producing exceptional beer. Producing exceptional beer is necessarily more costly than producing indifferent beer – don't believe anyone who tells you otherwise.
Ask wine-lovers "How much would you consider exorbitant for a bottle of 12% ABV wine?" and the response would be a puzzled "which wine?"
Posted by Jeff Pickthall at 9:57 am 3 comments:

Ever the sceptic, I feel I should point out that, although excessive beer tax is a big problem, I feel there is a hidden agenda in the "Axe the Beer Tax" campaign. Looking at the corporate sponsors of the campaign it seems to me there are a lot of companies in there who would like to divert attention away from other factors contributing to the pub downturn – strangulatory tenancies and, above all, the tie system. Having said that, I have registered my support and I have pestered my MP John Hutton on the subject (although I did alter the wording of the letter template to include an urge to support Fair Pint).
If anyone from Axe the Tax should read this – good idea providing code to embed your Tax-O-Meter and Postcard but they are too damned big for blogs.
Posted by Jeff Pickthall at 12:48 pm 1 comment:

Keen followers may have noticed that my YoB seems to have dried up.
Yes ... and no.
I'm still emailing my blog list with beery messages. In fact, there's a backlog of twenty or so waiting to be polished up. When they're done I'll be moving over to this Twitter malarkey thingummy – fortunately fumbly illiteracy is allowed there so I won't have to do any editing.
What I won't be doing is calling posts "Tweets" as the word reminds me of "the Tweets" who were responsible for a minor crime against humanity – the execrable "Birdie Song".
[BTW "The Birdie Song" is still popular in the tents at Oktoberfest 28 yrs after it was an international hit.]
Posted by Jeff Pickthall at 12:25 pm 2 comments:

I've been scanning beer names in the GBG again. I've noted the words which appear most often and I'm using them to name a hypothetical beer.
Waddya reckon?
It's going to be called ... [drumroll] ...
Old Gold Original Folly Wobbler's Revenge Tipple Pride.
....hmm
Posted by Jeff Pickthall at 2:21 pm 2 comments: