The Straw That Broke The Camel's Back

Browsing Newcastle Real Ale Listings before I pop over there at the weekend I came across a beer name that made me wince.

It didn't just make me wince, it made think of the film "Falling Down" – with me in it.

As I don't know where to get any guns or explosives, I thought I've got to do something a bit creative.

I've had an idea lurking for some time – a collaborative blog dedicated to improving cask ale's brand image by collecting images of dismal pumclips and the like. Hopefully we would knock some sense into the brewers thusly named and shamed.

BTW The beer name that pushed me over the edge was "Dognobbler" by Wylam Brewery. Don't get me wrong, I'm not criticising the beer, just the name. I regularly enjoy Wylam beers when I'm in the NE and John Boyle is a jolly decent chap but...

My mischievous interest piqued by a junk mail flyer, this morning I had an informal meeting with an Enterprise Inns recruitment manager, a nice lady from Solihull.

Putting on my investigative reporter hat, I packed my note-book and tape recorder. I also packed my annotated copy of the Business and Enterprise Committee Report on the Pubcos.*

Other than the nice recruitment lady,  I was the only person there.  My notes and the tape recorder had to stay in my bag, they would be too conspicuous. I had to scribble long-hand and work from memory. I certainly wasn't able to note everything she said but all the following quotes are direct.

We kicked off with some general chit chat in which I felt I was being tested on pre-existing knowledge of the pub trade. I didn't let on I'd been the co-founder and co-owner of a legendary specialist beer free-house.

I asked about Enterprises rivals. She listed Punch, Admiral etc. I mentioned Greene King had bought my old local pub. I'm good at reading (or at least noticing) body language. On the mention of GK her hand immediately covered her mouth – a gesture usually interpreted as occurring when lying or holding back information. Very curious.

We moved on. I mentioned the name of a local Enterprise pub that has opened and closed repeatedly the past couple of years. Apparently "they didn't keep up with obligations". She deftly moved the subject on before I could ask "such as..?".

Moving away from awkwardness. I asked about terms of leases. She gave me an overview of the major terms  – although funnily enough, she didn't mention upward-only rent reviews and foolishly forgot to ask about them.

We talked about an attractive Enterprise pub currently available in Ambleside. Apparently it will be leased on the understanding that:

"The incoming people would spend some of their own money on making it what it needs to be. We are cutting back on non-essential spends."

So, it's a dump and they want me to pay for its refurb.

I brought up the subject of the downturn in the pub-trade and mentioned that I'd seen lots of closed Enterprise pubs bearing "to let" signs. Apparently:

"Householders bought [pub] leases at the peak of the market to release equity, but the market plunged."

The implication there is that Enterprise's business practices had no influence on the number of lessees having their leases and livelihoods terminated.

I asked about the tie system. My favourite aspect of UK beer is the micro sector. With that in mind, I asked if, as an Enterprise lessee, I would be allowed to sell what I wanted. Apparently:

"Pretty much anything you want to sell, we can get"

Feigning limited knowledge of the sector, I offered "micros seem to be a growing field these days". I was re-assured they could supply me with:

"Most of the brands of cask ale being brewed"

I brought up the subject of imported beers. The response was a vague and weasily:

"We can get all the [imported] beers most people want"

She moved the subject on to wine. I sensed at this point I was expected to be impressed that:

"We get all our wine from Waverley. If you're doing well with wine we can use Bibendum"

We moved on to the pub situation in city centres, that they are filled with branded outlets such as Walkabout, Tiger Tiger etc. She moaned that Enterprise didn't have as many city centre pubs as they would like. She described Enterprise pubs as "independent". Unknowingly, she'd waved a red rag at this particular bull – but I didn't let my annoyance show. I asked "how can a tied pub in an estate of 8000+ be described as 'independent'?". It seems they're "independent" because:

"We don't brand our pubs at all"

My brain reeling from this assault on logic, I went back to the tie. I wanted to know the typical price differential between their tied supply and the open market:

"[our wholesale prices] are not necessarily higher than the open market"

Tellingly, she did the hand-over-mouth thing again.

Pushing the tie question further, again feigning ignorance, I asked her to explain why there seemed to be some controversy about the operating methods of the Pubcos. I mentioned that I'd noticed a local Cumbrian MP, Tim Farron had something to do with a body called "Fair Pint". I didn't let on that I'd previously interviewed Tim Farron on the subject for a magazine article. She did the awkward hand over mouth thing again and went into a rambling justification of the tie system based on the glaringly fallacious defence:

"The tie system has been in place for generations"

She digressed onto the situation that existed before the Beer Orders of 1989 and the creation of the Pubcos. Her view was that because there are now more beers and breweries than before the existence of the Pubcos, it must be the Pubco system that has enabled this to happen. She was floundering and I was doing my best to resist putting her straight.

On the subject of the brewing Pubcos, i.e. the Regional/Family Brewers, she seemed scornful. Perhaps she had got into her head that being interest in beer I may be a better candidate for them. With negative body-language and tone of voice she rambled about fixed term loan-ties offered by brewers:

Where did that come from? I think she may have been trying to move the subject away from sensitive subjects while attempting to find something with which to diss some of the opposition. I was astonished that she could be contemptuous of loan ties but favour  non-brewing 100% wet-tied estates.

"It's no good whingeing down the line you've been ripped off."

Doing a Jeremy Paxman, I asked what I might expect to earn as an Enterprise leaseholder. Another circuitous, hand-over-mouth ramble ensued. At no point did Solihull lady name any figure even when I insisted it was a very important question. In a rather awkward side-step she managed to move the subject on to necessity of gaining a personal license.

I asked about Brulines cellar monitoring equipment. I mentioned that I'd heard the system described as BruNazi. I mentioned the accusation that Brulines equipment allegedly can't differentiate between beer and water – a serious concern. Solihull lady went into a ramble about the benefits of Brulines including:

"It's very good for working out staffing levels. You'd be a fool not to use it"

Perhaps the most important question (other than earnings) is the ingoing costs. Here Solihull lady was seemingly quite open (or well-briefed). She explained how it works. 25% of annual rent as deposit plus one month's rent in advance with additional costs i.e. legal, surveys and stock-taking. Apparently this adds up to about £20,000 for the "average" Enterprise leased pub and £10 or £12k is the bare minimum. I've no idea of the accuracy of this figure, perhaps any Enterprise leaseholders reading this can enlighten us.

I asked about rents. Although I forgot to specifically mention such abuse of power as upward-only reviews I did describe a hypothetical situation like a large local employer going out of business and so depriving the pub of a large part of its trade. The message was: "tough!" but she couched it in the euphemistic:

"The economy is not a material change in circumstance"

I asked how long does a typical leaseholder stay in business before moving on, for whatever reason.

"I wouldn't like to put a term on it"

No, I bet you wouldn't. Surely that kind of information is foremost in the minds of Enterprise executives? Indeed, it has been suggested that the money paid by ingoing leaseholders and the charges made on surrendered leaseholders are built into the cashflow of Pubcos as revenue streams. For a recruitment advisor to avoid answering it is alarming and possibly dishonest.

I asked why Enterprise concentrates on leaseholds rather than managed houses. Apparently:

"Managed houses are not viable for us – too costly"

Yes but a pub's a pub isn't it? There aren't radically different modus operandi between individual pubs. So isn't this a weasily way of saying "we prefer leaseholders to bear the increasingly onerous costs and  the risks therein"

That was it really. My hour was up. I think I did reasonably well in my investigative reporter role. Funnily enough, I wasn't persuaded that I should take an Enterprise lease.

* A nice juicy extract: "There is a worrying pattern in the evidence presented to us [by lessees] of lack of support for lessees, of verbal agreements not honoured, and, on occasion, of downright bullying [by the pubco landlords]"

Tags: enterprise recruitment, the dark side of the force 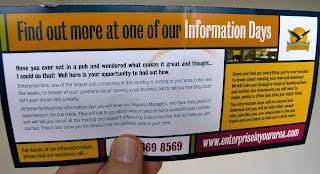 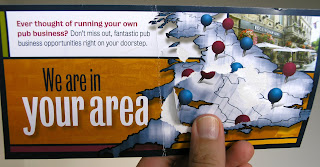 My mother called to let me know a leaflet had been delivered to her house which she thought must be for me because it was about pubs.
I asked her to scrutinise it – no it bore no name or address, it was just junk-mail accompanied by takeaway menus and handyman leaflets.
Yes it was about pubs – Enterprise Inns.
It seems Enterprise has taken to door-to-door leaflet drops to try to sell their poisoned leases to retired professionals!
Here's some blurb:

"Enterprise Inns is coming to your area in the next few weeks, to answer all your questions about running a pub business and to tell you how they could turn your dream into reality [read: 'redundancy money etc into thin air']."

"At these forthcoming information days you will meet our Regional Managers, who have many years of experience in the pub trade. They will talk to you about what it takes to run a successful pub business and will tell you about all the training and support offered by enterprise Inns that will help you get started. They'll also show you full details of all the available pubs in your area."

Funnily enough, I advised my mother (second hip replacement next week) to resist Enterprise's tempting offer.
I feel an urge to sign up for one of their brainwashing days armed with the BEC Report in the pubcos – with all the nasty details highlighted. I feel I have a duty to protect the innocent.
Posted by Jeff Pickthall at 3:32 pm 7 comments: