You are probably aware of the Hairy Bikers. They make hugely popular telly programmes and they sell caboodles of recipe books. Gordon, Nigella, Jamie and others also do these things but, pleasingly for us beer geeks, the Hairy Bikers are rather fond of beer and quite happy to say so.

The first episode of the Hairy Bikers new series "Everyday Gourmets" will feature beer. To be more precise, Dave and Si will "find out how beer can be as good a match with food as wine."

Dave and Si invited me to do a spot on camera talking them through beer and food matching. The scenes were shot last July at the highly agreeable Holyrood 9a pub in Edinburgh. I'm not going to go into detail about what beers I chose – you'll have to watch the programme to find out. I will though forestall comments on my beer selections.

I know what you beer geeks are like: you know lots of obscure beers. You like matching beer and food; you can match food with a myriad of obscure beers. You'll see my selections and think "you idiot Pickthall, you should have known beer X from brewery Y would have been perfect for that dish."

The average peak time telly viewer is not a beer geek. The show's producers know that. They know their viewers and they know what provokes angry letters in green ink. Obscure beers only available on the beer geek underground for instance. I was instructed not to choose anything too obscure. As it happened, the dishes we featured were only decided upon once we'd arrived at the venue for the shoot. I could therefore only choose from the beers Holyrood 9a had in stock, and what was on the shelves of the Waitrose on the other side of the city centre. Hence the absence of anything too esoteric to annoy the green ink brigade.

I suspect I will also get criticism from some quarters for not exclusively featuring British beers. I also suspect there will be purists who will declare the beers I chose to be rubbish because they are not necessarily bottle-conditioned. Well, either way, I don't give a toss. I stand by my selections. I hope you enjoy them too.

p.s. I've also written a beer and food bit for the Hairys' next book "Great Curries." Rodenbach Grand Cru with vindaloo anyone?
Posted by Jeff Pickthall at 2:34 pm 7 comments:

The Palate Cleansing Taste Of Onion 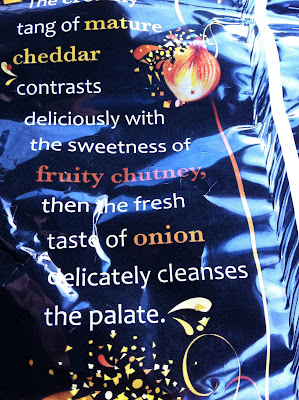 This Walkers Sensations packaging blurb has had me chuckling all morning.