I recently judged at SIBA’s Great Northern Beer Competition at the Mercure Hotel in Manchester.

SIBA is an organisation I respect.

I have considerably more respect for SIBA than I do another beer organisation that possesses a pseudo-Marxist perspective on the beer market, is notoriously dogmatic and intransigent, and promotes the fallacy that all real ale is good beer and its corollary, all non-real ale is bad beer.

I judged at the same SIBA event two years ago. It was a dispiriting experience. I witnessed incidents of spectacular beer-judging cluelessness.

SIBA adopts the position that beer judging should reflect the preferences of the kind of people who consume its members’ beers. No particular credentials are required to be a SIBA judge other than being a beer drinker and being somehow connected with the trades of brewing or selling beers (with a few random “dignitaries” requiring smoke blowing up their arses.)

Two years ago, two particular incidents occurred which stick in my mind. In one round of judging there was a bloke in a faded Pink Floyd t-shirt and mullet who decided he was the table’s expert. He told us he’d been working at beer festivals for thirty years etcetera ad nauseam. He pronounced his verdict on every beer we encountered. I soon realised he was the taste equivalent of cloth-eared when he failed to mark down a beer that was strongly diacetyl.

The second incident was similar. In a later round a chap in a brewery polo shirt (it transpired he was an employee of the brewery) appointed himself as the table loudmouth. In a round of worthy-but-dull pale golden beers we encountered one with a vivid fruity flavour. Mr Loudmouth announced “that’s my kind of beer” (his exact words stick in my mind.) Unfortunately the flavour was the unmistakeable (to me) green apple tang of acetaldehyde.

In both cases I could see the more inexperienced judges re-assess their scores upwards after hearing the mistaken praise from the know-alls. There was one very nice couple on the second table who had won a “win a day judging beer” competition in a pub. I watched them do what a lot of inexperienced judges do – picking up clues from others before forming their opinions. They marked the acetaldehyde beer highly.

I didn't judge last year but this year I was persuaded to judge again by Jon Kyme of the wonderful Stringers Beer of Ulverston. It wasn’t without trepidation that I travelled to Manchester.

My trepidations and reservationswere warranted. I found myself on a table judging premium bitters (if I recall correctly.) We encountered four or five worthy but dull beers. No glaring faults but nothing very interesting. Two of the beers were more vivid,  possessing a hop character that suggested an American influence. They were both well-executed and intelligently conceived without being mouth-puckeringly bitter. A fellow judge declared “they smell, my customers wouldn’t drink them” and presented a histrionic grimace. Her body-language was as if she’d been offered a dog-shit sandwich. As the loudmouth of the table, more timid, inexperienced judges lapped it up and the beers scored badly. I was tempted to offer a spirited defence of the beers and a critique of her ability to judge beer, but I felt it not worth the risk of the red mist descending. I kept schtum.

In a later round I found myself once again on the same table as this Bet Lynch. Amongst the array of worthy but dull beers there was one that was strongly diacetyl. Junior Bet Lynch commented "Ooh, that’s nice, it’s kind of…” Her words tailed off and I filled in "butterscotch.” "Yes, that's it!" This time I had to explain that the flavour and aroma of butterscotch was undesirable. The existence of the unmistakeable oxidised flavour of damp cardboard in the finish confirmed to me this beer was fucked. Bet Lynch deferred to my superior wisdom. Wise.

I insisted the beer was off. Our runner took away the offending jug of beer and returned with a replacement. The runner told us that the brewer of the beer was helping behind the scenes and that he had spotted his own beer being returned. The brewer was told his beer was suspected of being off. We were told the brewer had responded “it’s supposed to be like that – malty.” Our second jug was similarly off. I gave it a rock-bottom score. I don’t suppose it scored highly with my fellow judges, but I might be wrong.

On my final table of the day I found myself judging with a large domineering chap who worked for a brewery, and a couple of his chums. Mr Bellicose chose to chunter audibly through his judging – "eeh, I couldn't drink six pints o' that" or "I could drink that all night" and scored the beers accordingly. The beers he favoured were the blandest; the beers he marked down had more flavour. "Well Mr Bellicose," I wanted to shout, "we don't give a fuck what you would choose to pour down your fat ignorant neck."

After the judging I was talking toWill France of the marvellous Port Street Beer House. He made similar observations about conspicuously bad judging. As manager of a trendy crafty beer catwalk outlet he knew his customers wouldn’t be too impressed by an insipid 3.8% session beer, just as Bet Lynch’s customers wouldn’t be impressed by a 6% hop-bomb.

In one corner there are judges like Will and myself: familiar with a wide range of styles of beer, knowledgeable about common off-flavours, unperturbed by big flavours or high strength. In the other corner there is Bet Lynch and Mr Bellicose: their judging defined by narrow parameters of acceptability.

This raises a question: which kind of judge better serves SIBA’s desire to award prizes to the best beers by its members? Will France and I or Bet Lynch and Mr Bellicose?

It’s not hard is it?

The profusion of the the Bet Lynch and Mr Bellicose type of judge is letting down SIBA. SIBA’s policy of turning beer judging into a jolly for all-and-sundry is lowering the standard of judging and undermining the validity of its competitions. The results may well reflect the views of many ordinary drinkers, but ordinary drinkers aren't necessarily capable of making sound judgements.

P.s. To whom it may concern in SIBA: biscuits for cheese are NOT suitable palate-cleansers. Sugars and fats of Hovis biscuits and TUCs have the opposite effect. 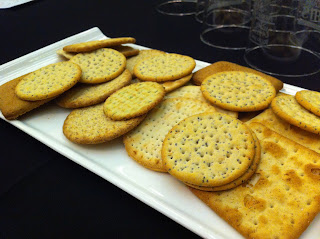