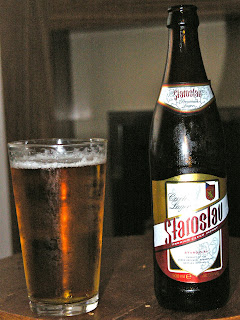 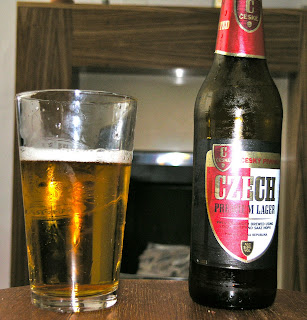 I love lager.
I hate to hear ill-informed anti-lager rants from real ale jihadists. For a beer drinker to disregard all lager as rubbish is like a wine drinker dismissing all white wine as rubbish. Sure Blue Nun is crap, but that doesn't make all white wine crap. Sure Fosters et al are the Blue Nuns of the beer world, but they don't make all lager crap. When I hear any variation on the phrase "the war against lager", I think "this person doesn't actually care about beer."
Anyway, yesterday was hot. Last night my living room was 25c which is quite remarkable given that it spends ten months of the year at about 12-15c spurning the efforts of my central heating and gas fire to get it above 17c for any sustained period. So, last night I needed cold lager. I don't keep a huge cellar of exotic beer, in fact, lager is the only style I check I have emergency supplies of.
And so it was last night. First I opened a bottle of Staroslav from the Czech Republic. I wolfed it down without contemplative pauses a la Ice Cold in Alex. Not the most sophisticated lager I've ever had; a little too sharp in flavour and lacking complexity; but still hugely preferable to UK mass-market alternatives.
I then opened a bottle of Český Pivovar I had picked up in ASDA earlier. A whole different kettle of, er, malt and hops. Soft malt flavour reminded of the stuff inside Crunchie Bars I can't remember the name of. The Saaz hop character was beautifully integrated and a delight to behold. Thirst-quenching over and done with, I allowed Český Pivovar to caress my tongue and envelope me.
Lager inferior to ale? Nah, it's all just beer - some good, some bad.
BTW - You don't have to go to specialist beer shops for either of these beers, they're in national supermarkets. The Český Pivovar is in ASDA and Booths; Staroslav in Tesco and ALDI.
Posted by Jeff Pickthall at 9:00 am

Id say the likes of Jever or Meantime Pilsner are up there in my fave lagers. Veltins is also mighty fine. Thats not dismissing the various great Dunkels, Bocks Marzens, Hells ect style lagers available.

I had a pint of Budweiser Budvar tonight. It was too fizzy and too cold. But I did try.

Hay, we can't agree on everything.

Glad its not just me then, Jeff! Here in the land of Carlsberg and Tuborg the standard lager is, well, standard, but still a slight notch above the UK (don't ask me why). On the other hand there are a growing number of brewers in the Nordic region experimenting with lagers and they are really good.

Those real ale jihadists would be Ale Qaeda!

Considering I live in Germany now, I have less choice than before, but there's a hell of a lot of good lagerbiers to like. And they sure as hell aren't all yellow and fizzy.

how about (in a Yorkshire accent) - T'Ale-iban ?

You've got a point there, Jeff. I rarely drink lager in the pub, but in hot weather there's nothing to beat a good cold bottle from the fridge.

Too true. cold and crisp heaven in a glass.

there are some great lagers out there - but this is something I have only recently discovered. Taddington's Moravka is my current addiction!!

Thankls for the tip about the Cesky Pivovar. I bought some at Asda on Saturday, absolute bargain at 91p for a 500ml bottle, and it went down a treat after a hard day mowing and tidying the garden on Sunday. Just the job!!

BTW, I'm not sure "Cesky Pivovar" is the name of this beer, I suspect it just means "Czech Brewery".

Whatever, very tasty beer and a good recommendation, thanks again