It has a fantastic complex aroma of coffee and multitude of malt nuances. It's a beer that needs sipping, it's so rich and juicy and strong it defies a decent gulp. Its carbonation is barely discernable.

So in the pub recently I quipped it would benefit from a dash of Coke. The veins in Hardknott Dave's neck bulged as he forced a laugh at my heretical utterance.

At home last night I realised I was in possession of some Coke (a-Cola, that is) and a VN. So an experiment was in order.

I poured VN into two glasses. One as a control, one to receive the heretical mixer.

In the second glass I started with Coke:VN at 1:1. Yuk. The Coke overwhelmed the beer and a perfectly acceptable soft drink was ruined.

Tasting the control beer in the other glass came as a shock; it seemed extra rich, cloying and intense. The mix was lighter and easier drinking whilst the VN's abundant flavours remained. But the Coke flavour seemed to fight above its weight. Further dilution was necessary. I poured the control and the mix into one glass. Finally it was spot-on. I guess the ratio was about 1:10. 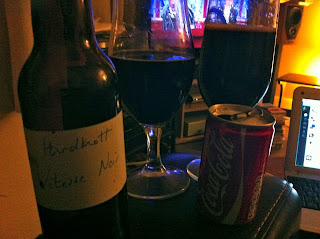 When did Coke become a 'perfectly acceptable' soft drink? What have you been ruining your palate with? ;)

Gareth, I'm with you all the way, it baffles me why Jeff still thinks Coke is a "perfectly acceptable" soft drink when in all other respects he has a fine palate.

I'll admit that Vitesse Noir could do with a little more condition. At this point in time we are unsure of the reasons for it's apparent low carbonation but suspect it is a combination of high ABV subduing the yeast in bottle conditioning and the relatively short length of time it's been in bottle.

There are some drinkers who prefer a lower carbonation level, personal taste I suspect, similar to the personal preference with regard to soft drinks. For some drinkers Vitesse Noir is just right. Drinkers who would like more condition would be advised to lay a bottle down for 6 months and the yeast will continue to work.

I would dispute the comment made elsewhere that concludes it's as "flat as a witches tit" It still has higher carbonation in bottle than, say, a cask beer. I suggest the tit who made that comment out does Jeff's heresy especially when the perpetrator regularly complains about keg beer being too fizzy.

Dave - You are a nice guy, but calling me a tit when I made an obvious jocular remark is going too far.

You are getting too big for your boots when you attack friends. I didn't say anything about your beer. I surmised - in the same vein as Jeff - that is in a kid on fashion - which I assumed Jeff's piece to be. I just joined in on the joke. Only the most self centred, or thin skinned, could have thought otherwise.

You have achieved the almost impossible (these days)in making me angry. In fact I am, to use an old Scottish phrase - beelin.

And keg beer IS (mostly) too fizzy. Everyone knows that.

The correct level of carbonation in any beer is, of course, that intended by the brewer.

Personally, I've had no problem getting beers almost as strong as VN to condition in bottle. It shouldn't take much more than a couple of weeks (or 3) at sensible temperatures. It's not rocket science.

A "bottle conditioned" beer that isn't adequately conditioned is defective goods and should be returned for a refund.

Tandleman, I apologise for upsetting you with my attempt at a jocular retort to your joculation.

Stringers, at 11% we are close to the rated limit for the yeast we have used in this case. It's the strongest beer we've made to date and other beers we've made which are almost as strong have worked well. I'd dispute that it isn't adequately conditioned and indeed quite a few people appear to have been very pleased with the beer indeed. I'm very happy with the results and adding coke certainly isn't what the brewer intended.

It is a controversial beer that has been received well by the people we made it for, but others seem intent on trying to shoot it down. I expect that it's not a beer for the vast majority, and I'm happy with that.

Keg beer is exactly as it's supposed to be and I know for a fact that the majority of the population certainly do not know that it's too fizzy.

"Keg beer is exactly as it's supposed to be and I know for a fact that the majority of the population certainly do not know that it's too fizzy."

Only because they haven't had any yet! ;-)

Jeff, what other beers would you improve by adding Coke™?

Why stop at Coke? How about Granite and Lime, or Aether'n'Black?