In the fields behind my mother's house the hedgerows are laden with sloe berries which look like they'll be fully ripe in a couple of weeks.

Obviously we'll be having a go at sloe gin but naturally the notion of "sloe beer" is shouting at me.
Sloes are hellishly bitter so presumably they could assist in the role normally played by bittering hops whilst adding some of their own flavours.
The worry is that I don't recall ever having come across a sloe beer. A Google search on "sloe beer" only produces a thin smattering of non-illuminating hits. This could be for one of three reasons:

So, waddya reckon? Could sloe beer be a goer or should I stick to sloe gin?

UPDATE: Peter Alexander, a.k.a. "Tandleman" has tipped me off that Lees once produced a sloe beer. Thanks Pete. Anyone tasted it? 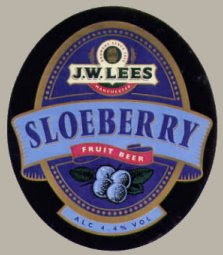 I'm planning elderberry wine or beer (or even Ribena). I've heard of using elderflowers, but not the berries once they're dark and ripe.

Get us 10 lbs of sloes and we'll have a go. Have got some dark lightly hopped strongish base beer that we we're thinking of using for a fruit effort - referment with the wild yeast on the berries - could be horrible.

Sharp's Winter Berry has sloes (and other stuff), apparently.

damson beer I did last year had 20lbs in 3.5brl brew. just got enough of a hint of the fruit to know it was there.

Lees did a sloe beer once. I still have the pumpclip somewhere. It was good I recall.

Having tasted one raw I think 20lbs would be enough to bitter a swimming pool's worth of beer!

I'll get picking in a couple of weeks.

My experience with fruit in beer is that it is surprising how the flavour of the fruit gets lost.

Bittering requirement, as I understand it, can be correlated to ABV; the stronger a drink the more bittering compounds are needed for the same effect.

Looking at examples of sloe gin recipes the rate of addition for sloes is about 2.5kg per litre of pure alcohol. a 1000 litre brew at 6% would require 150kg of sloes.

Alternative, sloe gin is made by adding 500g of sloes to 500ml of gin. If we ignore the ABV thing, to get the same bitterness as sloe gin you would need 1000kg of sloes for a 1000 litre brew.

Either way, 20kg is not too much, unless my maths is pants, which is possible.

Sloeberry Beer (Schlehenbier) was made for hunderds of years in northern Germany.Unfortunatly, the style died off in the early 1900's after the introduction of "Bavarian Purity Law" as a national standard in Germany. You can however still find rare local brews that serve it if you look hard enough. Had conversation with a braumeister of a local braustube onece on Schlehenbier, ad he said the trick is to wait for the fall after the first frost. Much of the betterniss is gone from the berrys. Useeing a freezer to cheat wont work.