CAMRA's Colin Valentine's unwise attack on beer bloggers has created a shit storm on those very blogs. By copying and pasting all the Valentine-gate blog posts and comments I could find into a Word document I have counted almost 28,000 words. Very few of them defend Mr Valentine.


As a long-term CAMRA-sceptic I do rather relish the spectacle of the organisation's bluster and prattle being put under the microscope by people who know what they are talking about.


Just as authoritarian regimes in North Africa and the Middle East attempt to quell revolutions that have been enabled and catalysed by the information-sharing characteristics of social networking, CAMRA's chairman attempts to discredit those he sees as dissidents. If CAMRA possessed water cannons they would have been sent to the Beer Bloggers' Conference. 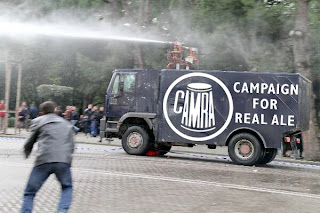 At the core of the debate there is a very simple conundrum, a cognitive dissonance,  which CAMRA must work out or else face continuing criticism and pressure.


Central to CAMRA's ethos is the tenet that cask beer is good, keg beer is bad. I don't know if this is explicitly stated anywhere but it is writ large in the organisation's activities: annually it publishes a book called "The Good Beer Guide" exclusively about cask ale; it prohibits keg beer at its events and seeks dissuade pubs and brewers from selling keg beer.


As we all know, the problem for CAMRA is that good keg beer does exist*. Therefore the core tenet is fallacious.


In order to divert us from the awkwardness of this contradiction, CAMRA apologists tell us that that the cask:good/keg:bad is not CAMRA's belief.


Here's Tandleman in the comments on Zythophile's piece: "Anyone that thinks that is daft. But I don’t think CAMRA actually says that". Disingenuous or what?


So, Tandleman and CAMRA friends: if cask:good/keg:bad is, as you say, not the belief of CAMRA, why does CAMRA bother to exist? What is it about real ale that makes you "campaign for" it if "real ale" and "good beer" are not synonymous?


*Good keg beer is acknowledged by CAMRA only if it is foreign, as Johnny Foreigner doesn't know any better.

Posted by Jeff Pickthall at 2:42 pm

Simple really, I like 'real ale' best. Obviously I'll drink anything if needs be but given the choice I'll drink cask beer above all others.

I'm just amazed they can get the pressure up that high on their water cannon without applying extraneous gas pressure.

I'm looking on all of this with a certain amount of amusement; on the one hand I'm not overtly anti-CAMRA, but on the other I am pro-keg.

What is clear is that none of us know how it is going to end, if it ends at all. But the status quo is clearly unsatisfactory.

No more misleading or disingenuous as most of your "analysis" tends to be Jeff. But you are a smart guy and know that. It's what Ed says really and to add, sometimes you have to support something very actively to retain it. Just ask yourself. What happened to Cadbury's Tiffin?

It's air BN. Like what Jeff says, only not hot.

Right Jeff, now I've swallowed your bait, that must be worth a pint. Keg or cask.

Dave you are right. Switch entirely to keg immediately.

What exactly is Cadbury's Tiffin, and why should I care anyway?

Interesting stuff - my glass is half full (usually real ale) so I do support the 'pro' part of the argument. We actively promote real ales as a range, but also sell one quality lager - brewed by Daniel Twaites to the Bavarian standard. If more brewers move to more keg products, that will help our USP, so I don't mind really.

Why the sudden enthusiasm for keg beers? Can you give me an example of a good one, because I've never found one. Keg beer is dead beer - why wouldn't a beer stifled in a keg be better if allowed to live and breathe naturally?

I note that the Beer Bloggers Conference is part-sponsored by Molson/Coors. I don't know what that marketing conglomerate has to do with good beer, as anything I've ever encountered bearing its imprimatur has been pretty bland and disgusting.

And why have you made it as difficult as possible to post comments? This is my umpteenth attempt to post this comment using different formulae - my name and email address seem not to be enough.

Exactly Dave. I don't want people to be saying in 20 or 30 years time, "what is cask beer anyway?"

Silly Gilly - It won't be a USP if everyone does it. Duh!

As far as I know, the continued existence of the Cadbury's Tiffin bar in Ireland has not been caused by a cadre of chocolate lovers denying that non-Tiffin bars are real chocolate. I'd be willing to bet most Tiffin buyers are happy to eat other chocolate somtimes too.

Thought that would tempt you in. Nice when a plan comes to fruition!

I do try and get some Tiffins from Ireland whenever I can though.

Swan, of Kennet, seems to embody exactly the misinformation that is out there. Gilly, who I know for a fact is not silly, has good keg beer for instance. Keg beer is not necessarily "dead" and I have several kegs of unfiltered Infra Red and Queboid being served in several pubs at this very moment in time.

Tandleman, I can't help feeling you have misunderstood Gilly, who I'd suggest is most certainly not silly. Gill and Martin run a very pro-cask pub. 8 handpulls if memory serves and occasionally fill some of them with Hardknott beer. Proper disdain for mass produced lager consumers and Bedfordshire brewer's tee shirt wearers alike*, which I've no doubt would wind Jeff up. They are not worried about "craft keg" whatever we might think it is, because people visit their pub for cask beer. If I offered them any of my keg I suspect I'd never be welcome to cross their threshold again, so the subject is never mentioned when supping their excellent, but sadly unsparkled, cask beer, which IS their USP.

*That was an in joke especially for Gill and Gov, sorry.

As for Molson Coors, perhaps the vast majority of their product volume is bland, overly QA controlled and sterile, but The White Shield brewery and Sharps brewery are still turning out some good stuff. Carling also makes a good base for spiking with flavour defect training due to its low defect and blandness, unless you want to train for DMS detection.....

"I'm just amazed they can get the pressure up that high on their water cannon without applying extraneous gas pressure."

Ten out of ten. Bravo!

I have nothing but respect for the CAMRA members who argue that the Campaign for Real Ale should focus mainly on campaigning for real ale.

You guys are SO let down by the pedagogues who believe the most effective way to do that is to denigrate other beers.

And can I congratulate you on your Photoshopping skills, Jeff. Excellent.

I have to disagree with Pete: I don't want Camra to rush into embracing every type of keg, but I don't have any respect for people who fetishise one type of beer to the exclusion of all others, and who think that British beer history ought to have stopped in 1950.

You guys are SO let down by the pedagogues who believe the most effective way to do that is to denigrate other beers.

Who's that then? Even Colin Valentine didn't say that craft keg tastes horrible - he just made the point that it is in fact keg. If that's 'denigration', craft keg advocates are in real trouble.

At the end of the day it is how the beer taste's not how it is dispensed!

I have tasted as much bad cask beer as I have Keg but ultimately Cask and Keg can still be side by side on the bar as long as they taste great!

"You guys are SO let down by the pedagogues who believe the most effective way to do that is to denigrate other beers."

You guys are SO let down by the pedagogues who believe the most effective way to promote keg beer is to denigrate CAMRA.

This is all too silly.

Phil, sadly there are too many of them. Swan above does exactly that and there are many, many more who utter the same sort of nonsense. I disagree that Colin was only pointing out that keg was keg. "It may have hops in it, but it is keg"

In other words he is saying that it does not matter how good the beer is, it is in a keg and therefore it is crap. People putting "burp" in their tweets don't help either in my view. Some people like fizzy drinks, it does not make them idiots.

It's not getting silly; it did that a long time ago.

"You guys are SO let down by the pedagogues who believe the most effective way to promote keg beer is to denigrate CAMRA."

Who are these pedagogues you refer to?

Sorry Tandy, you're being disingenuous again. Straw man argument there. No one (to my knowledge) is suggesting the best way to promote keg beer is by denigrating CAMRA.

And criticism is not the same thing as denigration.

I think CAMRA should get some water cannons. Back to militancy!