A Bit of Brewing History.

I was in the Stagger Inn, Stainton a few days ago for a family do, making use of Monday's happy hour and two-for-one deals.

The food is remarkably good given the low prices. Coniston Bluebird could have been a little fresher and cooler. The coloured lightbulbs add nothing to the place except to make it look a bit of a tart's boudoir. Nonetheless, it should be on your radar for a reasonable pub feed if you're visiting South Cumbria. It's a couple of miles from Cumbria's biggest tourist attraction – the South Lakes Wildlife Park – where the food offering is abysmal, so it's worth making a note of.

Hidden away on the wall of the gents' toilets are two old photographs. They aren't dated but in the corner of each is the inscription "Bass, Burton."

I managed to get a snap of one of the pics, but loitering in toilets with a camera isn't my preferred occupation, so I left the second one.

I might be mistaken, but these pictures looked like very old, possibly original, prints. Does anyone know if this picture has appeared anywhere else? Have I discovered a significant snapshot of Britain's brewing heritage, or did they pick it up at Athena? 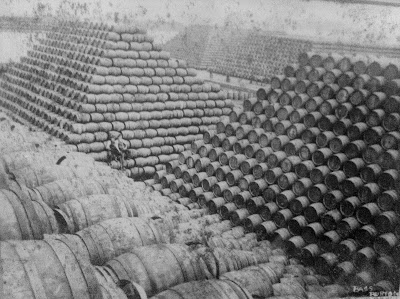 That does look slightly familiar, but maybe just because I saw something similar at the National Brewery Centre when I was there earlier this year?

I've seen a few photos of the 'Bass pyramids' before - as Darren says, there's at least one at the National Museum - and this one looks very similar to one used in the book 'Brewery Railways of Burton' (I think).

I'll check when I get home.