There's much I admire about Brewdog.

I particularly admire their realisation that selling beer to younger people and women is not the impossible fantasy that exists in the minds of those mired in the real-ale mentality. Divest your beer of twee traditionality and parochialism, give it contemporary branding, and bang on about being part of a backlash. Hey presto - otherwise hard-to-get-at demographics drink the beer you want to sell them. I know it because I've done it.

I looked forward to the opening of a Brewdog bar in Newcastle, a city I'm fond of, having spent the late eighties and early nineties there. My brother and his family live there now and I'm a frequent visitor.

Steve and I paid our first visit to Brewdog's Newcastle bar last Tuesday. Having particularly fond memories of rather beautiful 77 Lager a couple of years ago that's what we went for. Both pints were served distinctly short. We politely requested top ups. With "don't waste my time you ignorant plebs" body language the barmaid took them back and went through the motions of topping up the pints. They came back to us still distinctly short. The beer line had gone up by a millimetre, or possibly not at all. We put this shoddy service down to teething troubles, the bar had only been open a week.

Two days later I babysat while Steve and his wife Jane went out. They went to the Brewdog bar. The same thing happened. Ste's pint was distinctly short. Jane had a problem-fee half in a lined glass. Ste requested a top-up. The barmaid turned the glass such that the Government Stamp was facing him. She pointed at the etch and said "it's a pint to the top of the etch; that's the way we're trained to serve pints." Steve persevered in his polite request for a top up but he says when it was delivered it was with "bad grace."


Steve, evidently annoyed, asked me to Tweet the annoyance.


Scandal: @BrewDogNewc barstaff trained to fill pints to the top of the etch. @s_pickthall is mighty furious. 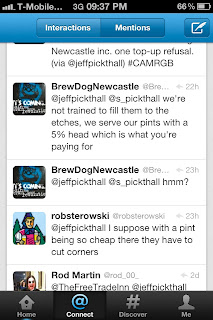 Well, @BrewDogNewcastle, I have news for you: when we pay for a pint, we pay for a pint of liquid. You are allowed a -5% error, which must be corrected if requested by the customer. And a request for a top-up "should always be received with good grace and should never be refused" in the words of the BBPA. A deficit of greater than 5% should be corrected automatically and should definitely not be served as a matter of policy. Newcastle Trading Standards will be delighted to have a word with you about the rules if you are in doubt.

The following day Steve and I were in the Free Trade Inn "Newcastle's Poshest Pub™". The subject of the new Brewdog bar arose. There various people including the FT's barstaff also commented that they'd experienced short measures from BD. A bespectacled barman whose name I don't know said he had even been refused a top up.

There are two possibilities: 1) An enterprising bar manager has decided to impress his employers with high yields from his kegs, 2) Short measures are Brewdog's corporate policy. Either way,  short measures are shoddy and deceitful and illegal.

Brewdog: sort it out. Don't take the piss out of your customers.

BTW, Steve and are not CAMRA pedants and we do not support the organisation's Full Pint campaign, so don't go tarring us with that brush. We just know a short pint when we see one.

On second thoughts, Jeff, don't you realise that banging on about short-measure marks you out as a penny-pinching fuddy-duddy-fogey which is NOT AWESOME. Happen the COOL KIDS are happy to be ripped-off by tattooed barcandy as long as they get to see some piercings. It's part of the CRAFT EXPERIENCE. You dig, dog?

We're not "take it to the toppers" either but, now I think about it, I don't think I've ever had to ask for a top up anywhere, anyway. Opened my mouth to do so in a St Austell pub a while back and, before I had chance, the barmaid had snatched the pint from my hand, apologised, and sorted it. In fact, we do the opposite more often: "Don't pour that perfect head away!"

Sounds like there's something funny going on at BD Newcastle, but hopefully crossed-wires rather than outright cynical moneygrubbing. Otherwise, a shark-jumping moment for them.

Up in BrewDog Aberdeen short measure has never been a problem.
But I do wonder at their 'Guest'. Do they run a keg until it's dry or do they take them off part empty only to re-appear later?
Looking at recent guests, particularly from Hitachino, I strongly suspect the latter.
And BrewDog bang on a bout fresh beer being best. If I'm right I wonder how long some of those kegs have been on the go.

we do not support the organisation's Full Pint campaign

You're against short measure, except if CAMRA are talking about it at the time?

Snark aside, this has been noted elsewhere, although I can't find the post now. Somebody pointed out that they'd be getting more pints per keg than they would to the equivalent-sized cask anyway, even with full measure - and everything I've seen suggests they charge more for a pint of keg than what used to be the price of a pint of cask BD beer. (Sorry for the convoluted syntax, but you know what I mean.) Naughty, naughty BrewDog.

phil, i think this is the post you mention?

If you choose to do business with Brewpooch don't be surprised when they pull shit like this. Everyone should know what they're like by now, surely.

Cheers - that's the one. So we've got short measure being reported at BrewDog Newcastle and BrewDog Nottingham, and someone who works for BrewDog in London saying that he refuses requests for a top-up as "the beer falls just short of the line because by law there is an allowance for head".

It's almost as if they were serving short measures as a matter of company policy.

Yes Phil, CAMRA's campaign is for lined pints in oversized glasses. That's not what we favour. The current system is fine as long as transgressors are pulled up.

Hi folks. I had the chance to have a chat with Max at BD Notts yesterday, see post here: http://beeradvice.blogspot.co.uk/2012/04/catharsis.html I've got no reason to doubt what he said, which I'm sure is going to brand me a complete mug in the eyes of some! I guess whether it does prove to be true will show in the fullness of time.

Not saying you're a mug, but it does seem like a bizarre coincidence that staff at three different BrewDog bars, hundreds of miles apart, should all have formed the same mistaken view about full measures and top-ups.

You're right Phil, and I hadn't have wondered the same thing I wouldn't have blogged about it in the first place. I was just saying the guy seemed genuine when I spoke to him about it - again, it remains to be seen if it keeps happening.

topup any bangladeshi mobile from this site

Thanks for this post.We current service offerings include Software Development,Web & Graphic Development ,Online Marketing , Hosting & IT Management ,Telecom & Network Services,provider of Business Process Outsourcing,Wordpress,php web application,Joomla,Software Design & Development Bangladesh,Web Development. We have serviced and continuing to service countless businesses in Middle East and across the globe.