I had lunch with a couple of friends yesterday. It was a good pub: a decent turnover of cask ales and real food made from scratch. My friend asked for vinegar for his chips.

"Sorry, we don't do vinegar - this is a real ale pub" came the reply.

A few weeks ago, in another pub a few miles away, the people at the next table were ordering food. They asked for chips:"Sorry, we don't do chips. Too many people ask for vinegar and we can't do vinegar because this is a real ale pub".

In a third pub, a regular grumbled to me: "We asked for a big jar of cockles on the bar but the boss won't do it because of the vinegar. The same with pickled eggs".

I've been aware of this no-vinegar thing for some years. The idea seems to be that the mere presence of vinegar in the pub somehow adversely effects the beer.

This is vinegar that smells of bullshit.

By what means does the vinegar allegedly adversely effect the beer? I asked one of my lunch friends, who is a very sciencey person, with a PhD in organic chemistry to prove it. "Vinegar ectoplasm" he explained.

Adding to my suspicion that this is mumbo-jumbo, each of the pubs concerned is quite happy to serve other condiments that contain vinegar – tomato ketchup and brown sauce for instance. Indeed, one of them prides itself on making its own chutneys and pickles. Joined-up thinking is not in evidence.

My conclusion is that the vinegar-adversely-effects-beer thing is magical thinking. It is an idea - a meme - that is passed between people who don't question it.

Has anyone else spotted this? Can anyone defend the no-vinegar rule?


*Update: The Beercast has also covered this subject. Interestingly, the pub they mention is is no more than 15 miles or so from the ones I mentioned. Could the no-vinegar rule be a local South Cumbrian thing? http://thebeercast.com/2012/08/keep-our-pubs-vinegar-free.html 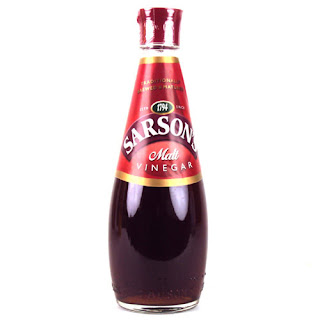 Posted by Jeff Pickthall at 9:48 am

In certain pubs the beer could be put on your chips

On first reading I thought this post was an elaborate joke. There are seriously pubs (bars, whatever) that refuse to have vinegar on the premises? Because it's supposed to affect the beer?

This is crazy talk. I wonder how it got started.

I can see how someone might choose to avoid vinegar while tasting beer critically. So you probably don't want it waved under a sensitive nose. But as far as contagion goes, there's going to be more acetic acid bacteria on the floor of the pub cellar than in the vinegar on the tables. The magical basis for this belief? "Miasma" or "effluvia" rather than ectoplasm, perhaps.

I experienced this many years ago - can't quite remember where - but definately in the Lakes. No vinegar even though we were eating outside. Not come across it anywhere else

I could just about understand it if there were a ban on rustic homemade vinegar, which would contain live acetobacter which could conceivably attach itself to the beer. So there is a kernel of truth in the myth. But all your standard bought-in vinegars are filtered and distilled and sterile, and as Jon points out, acetobacter is everywhere anyway.

Bridge Hotel at Buttermere had signs on every table in the 80s saying vinegar cannot be served as the fumes have an adverse affect on real ale. Used to make me chuckle.

Another Cumbrian manifestation of this phenomenon!

Yes! I remember seeing this at the Bridge in Buttermere many years ago. And I smelt bullshit back then.

If the beer is sealed in a keg how can the bacteria from the vinegar affect it?

Are you searching for a very genuine loan at an affordable interest rate of 3% process and approved within 4 working days? Have you been turned down Constantly by your Banks and other financial institutions because of bad credit? Loans ranging from $5000 USD to $20, 000, 000 USD maximum LOANS for Developing business a competitive edge / business expansion. We are certified, trustworthy, reliable, efficient, Fast and dynamic for real estate and any kinds of business financing. Contact us for more details and information.
Thanks & Regard
Dr James Eric Finance Pvt Ltd
(Whats App) 91-8929509036
E-mail: financialserviceoffer876@gmail.com