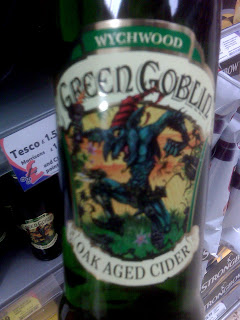 Tandleman's post "Brew Dog to be Top Dog by 2015" has once again got me thinking about branding in the craft beer sector.  We see from the linked article that not all is doom and gloom - "We have expanded 900% in 12 months" say BrewDog.
Melissa Cole pre-empted my thoughts on BrewDog: "... fearlessly dragging beer into the 21st century - for creating taste and flavour profiles that provoke thought, and occasionally shock, but termpering that by brewing very drinkable and accessible beers too. And for bringing humour to brewing that doesn't involve crass humour or innuendo."
Conspicuous by its absence from BrewDog presentation is tedious boring guff like "brewed by traditional technique only on from the choicest malt and hops" and "This beer commemorates the anniversary of the 900th Anniversary of the Battle of Milton Keynes when the famous warrior dwarf Aelred the Plucky singlehandedly slayed the Stevenage Hoards".
When I see that kind of stuff I despair. It's crap. It's complacent and unimaginative - and it's endemic.
Blogger Dave of the Woolpack Inn, up the road from me in Cumbria, a relative newcomer in Blogville, writes beautifully on the difficulties facing landlords: here, for instance. For a while he had me jealous of his insight and his eloquent ability to express it. But then he dropped a clanger - "I've always liked Wychwoods advertising."
Agh! Wychwood branding! Stop I can't take it any more - oh no, they've released the Goblins - Arrrgghhhhhh Help! Stop, stop, I'll give you the top-secret invasion plans!
Wychwood branding is in my beer Room 101. It's awful, it's embarrassing. And all that mickey-taking of lager drinkers - what the hell do they think that's going to achieve other make die-hard lager drinkers think "bugger that ale stuff"? It lets the side down.
Brewdog v. Wychwood: No contest.
p.s. yes, I know it's cider.
Posted by Jeff Pickthall at 11:55 am

Got to agree with what you say about Wychwood.

Ow!! - If I were sensitive I'd be upset, you see you've found the flaw in my character.....I don't like habitual lager drinkers - this is a problem when you run a pub as your supposed to like everybody -(Note to self: must regain Jeff's jealousy)

I have to agree with Mr Woolpack. I like the Wychwood advertising and even if you don't like their whole fantasy inspired style of advertising, the byline "whats the matter lagerboy afraid you might taste something" is clever.
BrewDogs marketing is great - its contemporary and edgy and works brilliantly with their culture and style, but I think there is a place for both approaches.

The problem with Wychwood's ads is that they've been around for ages, are often seen clinging to the belly of a flatulent sandal wearer and are used to sell bland, underflavoured beers.