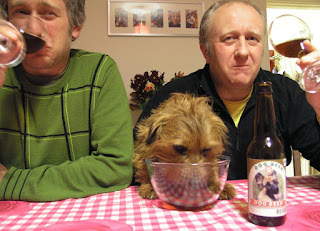 We couldn't resist tasting this one - "Dog Beer" which is available from the pet stall on Barrow Market.
The ingredients did at least include barley malt extract. The others: water, beef extract, lactic acid, E270, E202, E218 and E216.
The label advises pouring half the beer before shaking the remainder to create some frothy head. Try as we might, even violent shaking couldn't produce any froth - I guess we won't be seeing Lewis Hamilton using Dog Beer for customary grand-prix ejaculatory celebrations.
The gentle aroma was something like soy sauce crossed with bovril; not unpleasant but not beery. Steve liked what he described as "Autumn toffeeness". Not unpleasant but not terribly engaging either. The colour was a definitely beery walnut-brown like a brown ale.
Unsurprisingly, the flavour was watery soy sauce and bovril with a note of toffeeness. The human members of the tasting panel felt reluctant to finish their samples - no doubt this was a psychological effect of the doggy branding.
Rita (mixed up terrier, a rescue dog, age unknown) rather liked dog beer. Only seconds after the lid was off she was sniffing attentively, obviously perceiving more to the aroma than we humans did. Our vigourous shaking of the bottle must have releases plenty of aromas - Rita became quite excited and was licking her lips. When the samples were poured she couldn't get her face in quick enough. Despite her initial enthusiasm she also declined to finish her sample. It was put in her bowl and it disappeared overnight.
Posted by Jeff Pickthall at 10:50 am

Dog beer? we give dogs 0%abv beer? I thought a dog was a mans best friend, and we give them alcohol free beer?

Maybe we are worried about alcohol related pooch disorder and canine binge drinking!

I can see it now, packs of drunken dogs terrier-izing the streets of Barrow.

Perhaps the vets are getting concerned about doggie liver failure?

Is it brewed from real dogs?
I hope so. Anything that helps reduce the dog population is alright in my book!