Last night my brother and I popped into the Union Rooms in Newcastle Upon Tyne to try their festival beers.

I ordered a Schwarzbier (can't remember the name) and Ste a Woodforde's Dragon Hall. The barman apologised the Woodfordes had finished so, rather graciously, I turned round the pumpclip for him (I how this simple task often escapes them). This was revealed: 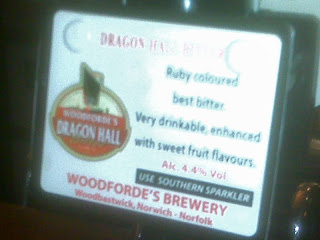 Since you were wondering: The wotsit Schwarzbier was agreeable but unmemorable; York Brewery Coppergate had "tantalising hints of niceness but otherwise vegetal yuk" according to Ste; Toshi's Amber spoiled by obvious oxidisation.

We moved onto the Bridge Hotel were we discovered a brilliant beer: "Hadda's Autumn" by Vale Brewing Company. It tasted like a lower strength version of Anchor Liberty Ale. And that is a very big compliment. Liberty is one of my desert-island beers. Tremendous.

Disappointingly, we encountered no atrocious beer names all evening.

The Union Rooms is grim most of the time, even vouchers and a beer festival cannot tempt me in.

Last time we had a Woodforde's beer at a beer festival up here (Tynedale in June) it said 'No Sparkler Recommended'. The one you saw must be the dumbed down version for McSpoons.

A 'Southern Sparkler'??!! This must be the well known spoons urban legend that there is nothing north of Newcastle so everything must be southern. blaming sparklers on the south? Next they'll be saying the Portman group are branching out into extreme beer brewing! or something equally ridiculous.

There are sparklers with different size holes. "Southern sparklers" have larger holes.

Overjoyed to see Vale's praises being sung here, Jeff. They're local to us, and I'm a massive fan. The Hadda's Autumn and Winter brews are always good. They have cracking regulars - VPA, Gravitas (both pale and pretty hoppy), Grumpling (more of a "trad" brown bitter, but decent - and is sold by M&S in bottles as "Buckinghamshire Ale"), and a best bitter which I suppose falls inbetween. They also do very good mild and porter (Black Swan and Black Beauty respectively) and regular specials.

Not only that, but they've turned The Hop Pole, a previously very dodgy pub in Aylesbury, into a fantastic beer-lover's destination.

Sorry for getting all evangelical, but they really are a cracking brewery.