This Week I have Mainly Been Drinking... and Eating... 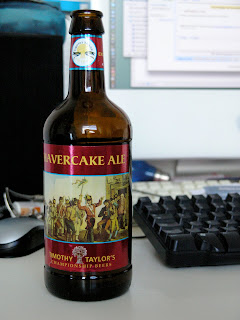 Timothy Taylor's Havercake Ale, bottled, 4.7% from Booths.
I've always been a bit underwhelmed by the bottled version Landlord - and this stablemate induced the same feeling. It's a perfectly acceptable pale ale, very English and quite swiggable but not very memorable.
I'm not a believer in bottled-beer-must-be-BC-to-be-any-good nor its converse non-bc-beer-is-intrinsically-inferior. However, having said that, I suspect that bottle-conditioning is what TT's beers lack.
It may be a bit lacklustre but it did partner liver/bacon/onion with mashed potato exceptionally well. I also had a Young's Special London Ale but it was too much for the food, it hogged the limelight.
I was so impressed by the L/B/O with a pale bitter I'm going to try it again with some more interesting ones. If you've any suggestions, please comment. I think I'll try a Barngates Tag Lag next.
My recipe for Liver&Bacon with Onion:
Put the partnering beer in the fridge.
Chop equal amounts of liver and bacon into mouthful size chunks. (If, like me, you're sqeamish about chopping liver, wait till it's cooked a while in the pan.)
Thickly slice a  big onion.
Chuck (bosh?) everything in a big wide pan with a dash each of Worcestershire Sauce and Tabasco.
Put on the lid and put it on a very low heat for ages, maybe an hour. Prepare your mashed potato.
If, after an hour, there's still obvious liquid rather than gravy remove the lid and turn up the heat until it's reduced.
Serve beer.
Serve food.

If you are Cumbrian surely you would "scop" it in the pan?

Nah, not in South Cumbria. I've spent so much in Newcastle over the years I may be inclined to "stot" it in the pan though.

Oh, that's right, you're in that bit of old Lancashire that they didn't know what to do with, so they lumbered us with it.

But then again, I was born in Westmoreland so I think your all impostors!!

Does that mean I can "stot" with rage, or at least mild irritation?

Apparently, according to An, who is a Mackem, its "stoting" with hail right now.

"Stot" I've got another new word!

I don't "get" Havercake - all my mates love it. I must be missing something. I love bottled Landord though.