The Customer is Always Wrong - Even When He is Right 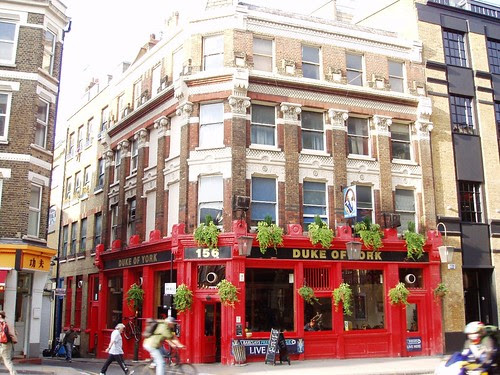 I stopped off at the Duke of York in Clerkenwell (around the corner from beer blogger Stonch's pub, the Gunmakers.) I was with two other committee members of the British Guild of Beer Writers. I mention this to suggest "we know what we're effing talking about." Allegedly.

I ordered three pints of Brakspear Bitter. The beer was distinctly warm (about 17C by my estimate) and noticably sour (I like gueuze/lambic but there's a time and a place.) I returned to the bar and made a polite and factual complaint. Body language told me I was probably talking to the boss. The same body language issued the message "I'll bite your arm off." Her response was the classic "it's room temperature: it's supposed to be like that."

Resisting the temptation to do a "I'll have you know..." act I maintained eye contact and restated my complaint. A long pause ensued and a sneering "I suppose you want something else" followed.

So the pub trade is in suffering? Well, in therapy-speak "change comes from within" – this would be a good place to start.
B.T.W thanks for the pic to Ewan-M on Flickr
Posted by Jeff Pickthall at 10:29 am

I don't know what to think about this. On one hand, pubs are closing at the rate of 30 a week. On the other hand, who wants a place with this sort of attitude to stay open?

It's typical of a pub that's taking its customers for granted. Good location, history etc it doesn't have to fight for customers so it's complacent on customer service.

Someone should produce guidelines for those who don't know what to look for when they try a pint. Or rather when the pint is bad. How do you know if it's in good nick? What does it mean if it's sour? Why is it just wet tasting? Should it really be this flat? What temperature is too warm cold? CArdboard? Pubs should sign up to this and provide leaflets or something at the bar.

I remember when I started drinking ale, that I wouldn't touch TT Landlord because I thought it had a horrible strange taste. It was only after I'd learned about keeping beer that I understood.

Unless you're into your beer you don't know! My brother told me he hated ale and when I visited a couple of his local pubs I found out why. Poorly kept but to him that was how all ale tasted. The CAMRA supported taste system is all very well if you know what beer should taste like but perhaps they should also be trying to give info to those potentially misinformed by badly-kept beer.