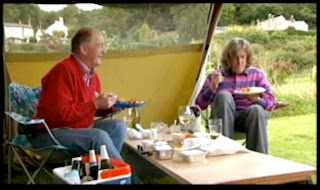 Until last night's episode I'd been enjoying Oz and James Drink to Britain. Firstly, it was nice to see beer getting some sympathetic media coverage, and secondly, they seemed to have done their research.
Unfortunately last night's episode (watch it here) was a big let down – shoddy and shallow.
Bugbear number 1: Given the rare privilege of sampling a 139 year old beer James May offered the trite comments "it's corked", "it's horrible, it tastes like it was strained through Magwitch's underpants, it's rotten". If I was Steve Wellington, minder of the old beers, I would feel very insulted that this TV ignoramus couldn't even make a sensible and perceptive comment on the flavour. I've tasted three or four beers from this collection and I know that they don't resemble anything you'd find in the pub. They more like a mysterious form of fortified wine something like a peculiar Medeira or Port with a dose of malt syrup – Tetley or Stella they ain't.
Bugbear number 2: The final sequence was an uninformed anti-lager rant. Anti-lager rants are what you expect from loudmouth CAMRA neophytes, not from renowned drinks writers and their sidekicks. Clarke repeated the oft-heard but lazily simplistic idea that lager's boom was due to clever advertising brainwashing beer drinkers - "a television advert could finally make people drink something they viscerally didn't want to drink". The duo then went on to taste lagers ("oh God, do we have to?" - Oz Clarke, "the least we can do is try the stuff" - James May) with curry. Isn't that a bit obvious? Lager and curry eh? How many milliseconds thought were given to that scene? ("Which lager goes best with curry? - Does it matter, would we notice?" - Oz). The duo went on to say disparaging things and make grimaces at some well-known dull lagers (I think I spotted Kinfisher) – but where was the necessary reminder that there are countless brilliant lagers in the world? No-bloody-where.
Posted by Jeff Pickthall at 9:22 am

Top post Jeff. I feel an anti-CAMRA rant coming up on my blog. Especially after I was labelled as an 'outsider' over at Boak and Bailey!

You can't expect balance from a programme made for mainstream TV - it needs someone behaving badly to get the viewing figures up.

I actually thought it wasn't a bad episode, although the lager and curry fiaml scene was, as you point out, given a milliseconds planning (at most).

Spot on, Jeff. I think I'd already come to terms with May's role as the nay-sayer - the "Clarkson", if you will - which for some reason the production team appear to feel gives the show "balance". It's a show about - predominantly - beer. Why can't both the hosts be (or be allowed to be) generally positive about beer.

It's like Clarkson himself on Top Gear and in his writings. I simply don't believe him most of the time. It's a very calculated taking of the contrarian position, dressed up as some blow being struck against "political correctness" or something. Utter, utter bollocks if you ask me.

Still, I am enjoying the show overall, especially the small brewers who have featured. What was the name of the brewery run from that Wigan woman's garage? Would love to try some of that beer.

And also - I'm a CAMRA member, who was FUMING at the anti-"lager" (as I don't think I'd really class anything they actually drank as being worthy of the name) section at the end. Thoughtless rubbish.

Tim - I think it was us being called outsiders...