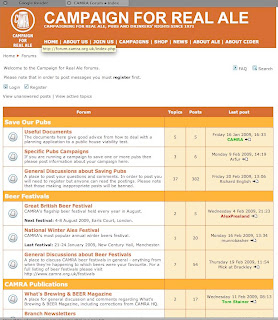 CAMRA's website now includes chat forums. They've made them public but, as far as I can see, closed to posts from non-members such as me. If I was mean-spirited I'd be tempted to think this was a deliberate attempt to silence dissidents – perhaps I'm being too cynical.
Fair enough, now uk.food+drink.real-ale attracts more tumbleweed than posts, CAMRA-types need another spleen-venting forum.
Entertainingly (to me, at least) they've chosen to make the forums searchable by keywords and in doing so have provided an insight into the issues that fire up the rank-and-file.
Let's have a look at some keywords:
"pubco" - 11 matches
"flavour" - 10 matches
"hops" - 3 matches
"malt" - 4 matches
"Darling" - no matches
"micro" - 7 matches
And, last but not least:
"The following words in your search query were ignored because they are too common words: price"
As yet it's early days for the forum so it isn't really fair to claim such a small sample actually tells us anything useful, still it will be interesting to watch.
-----------------
CORRECTION:  "Anonymous" (IP address St Albans) informs us that the forums are open to non-members. I apologise. Now everybody, form an orderly queue...
Posted by Jeff Pickthall at 1:42 pm

how does "beard", "barber" and "soap" fair in the searches?

The forum is not closed to non-members, quite the opposite in fact! Anyone can register to post, including non-members.

So, six months later what do you think?

Hello everyone! Who knows where to upload the film Avatar?
I even bought the film Avatar for a SMS to http://rsskino.ru/kinofilm/avatar.html , the link was, but download fails, the system will boot quite strange cocoa something.
Men, advise where to normal as quickly download film avatar?